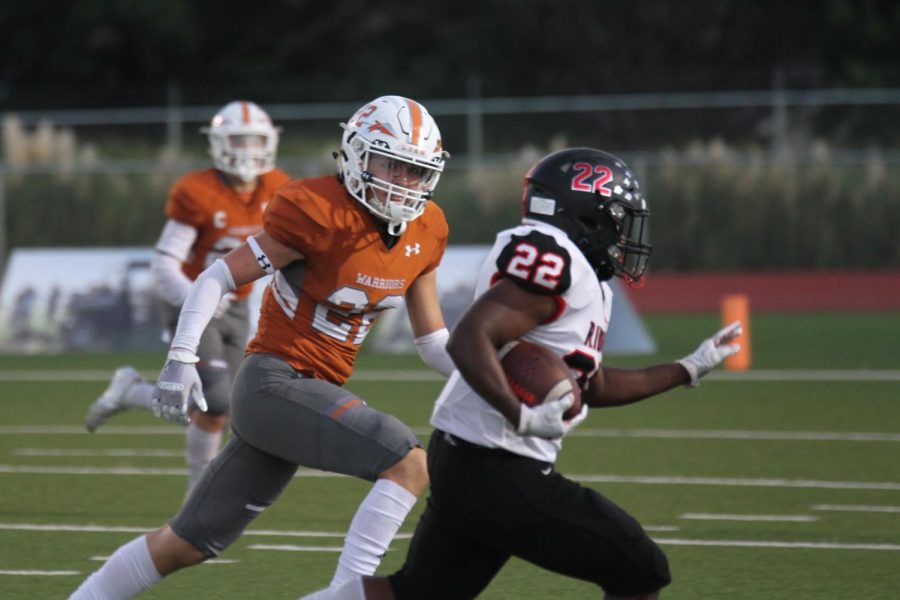 Drew Goodall ’21 chases down the Rangers’ running back. To finish the play, Goodall cut off the RB and forced him out of bounds.

Entering the confines of Dragon Stadium for the first time this season on Friday, Sept. 20, the varsity football team only had one goal in mind: to deal a tough, undefeated Vista Ridge Rangers side their first loss of the year in a hyped-up district clash. Another matchup which was proclaimed to be a battle of the offenses certainly lived up to its billing with over 90 points scored between the two teams. In the end, however, it was the visiting Rangers that came out on top, holding off a late Warriors comeback to prevail, 49-43.

“You know, we just played a good football team tonight. We just didn’t score as many points as they did, and so we missed some opportunities that I would’ve hoped that, if we had them back, we would’ve been able to capitalize on,” head coach Anthony Wood said. “Unfortunately, it just didn’t work the way we wanted, and that’s what happens when you play a good football team.”

Quarterback RJ Martinez ‘21 completed 26 passes for 313 yards and three passing touchdowns while also adding 157 yards on the ground and a rushing score, and Nate Anderson ‘21 rushed for two touchdowns on the ground. As for the receivers, Jace Lyne ‘20 recorded 133 yards and two touchdown receptions and Robbie Jeng ‘21 had seven catches, 79 receiving yards, and a touchdown catch of his own.

On the defensive side of the ball, linebacker Jaleel Davis ‘20 notched 13 tackles while defensive back Connor Cooper ‘20 had six tackles. Linebacker Vicente Ochoa ‘20 and defensive end EJ Wiley ‘21 each tallied a sack.

The Warriors had an excellent start to the game with the defense forcing a three-and-out thanks to a big sack from Ochoa. The offense immediately capitalized on the quick stop with a six-play, 54-yard drive ending with a four-yard touchdown run by Anderson to put the Warriors up 7-0. However, the Rangers were able to respond, marching 67 yards down the field for a touchdown of their own to seemingly tie the game. However, Vista Ridge’s kicker doinked the ensuing extra-point attempt off the right upright, allowing the Warriors to retain their lead 7-6. Right after that, the Warriors had a few big plays, including a 29-yard reception from Jeng and a 38-yard catch by Oliver Yu ‘20, to propel a five-play, 76-yard series ending in another touchdown. This time, the score was courtesy of Lyne, who recorded a 16-yard reception and found the end zone in the process to extend the Warriors’ advantage to 14-6. The visiting Rangers immediately responded with a quick scoring series to close the gap once again, but the Vista Ridge kicker missed another extra-point attempt, this time pushing it wide right. That series was the end of the scoring for the opening frame of the contest which finished with the Warriors leading 14-12.

The second quarter did not start off on a positive note like the first quarter did, with Martinez throwing his first interception of the season that Vista Ridge returned for a pick-six, but an unsportsmanlike conduct penalty on them negated the touchdown. The Warrior defense forced a three-and-out after that, giving the ball back to the offense. Martinez led the Warriors to yet another touchdown, going 50 yards on only four plays. With a great individual effort from Anderson on a 15-yard touchdown run. the Warriors pushed the lead to nine, 21-12. Vista Ridge responded with a touchdown of their own, cutting the lead to 21-19 with only a few minutes left to play in the half. With 2:11 on the clock, Martinez and the offense drove 75 yards down the field for yet another first-half touchdown, pushing their lead to 28-19 with less than a minute to go. However, the visiting Rangers stunned the Warriors with a miraculous Hail Mary call as time expired in the first half. This came after a controversial ruling where the officials put one second on the clock after what appeared to be a Vista Ridge timeout before the clock hit zero. On the play, the Rangers heaved a pass 45 yards into the endzone to cut into the deficit once again and send both teams into the locker rooms with the scoreline now at 28-26.

The Warriors couldn’t start out hot like they did in the first half, though, with a three-and-out giving the ball to the Rangers almost immediately after the second half began. From there, the Rangers tacked another touchdown onto the board, taking the lead for the first time. Their two-point conversion was no good, however, with Nathan Potter ‘20 intercepting the pass to prevent the Rangers from going up by more. After the failed conversion, the score was now in favor of the visitors 32-28. Things went from bad to worse for the home team; as the Warriors were driving, Martinez tossed another interception at Vista Ridge’s six-yard line, squandering another scoring opportunity for the home side. The Rangers then drove all the way down the field for another touchdown thanks to some big chunk plays to extend their advantage to 39-28. After that, the Warrior offense was stifled once again by the Rangers’ defense, forced to punt once more. However, Vista Ridge returned this punt all the way for another touchdown, once again increasing their lead. A third quarter where the Rangers outscored the Warriors 20-0 thankfully came to an end, but Vista Ridge possessed a 46-28 lead.

“We didn’t respond to adversity well throughout the game,” Sam Kainer ‘21 said. “We need to play better as a team, and we need to work harder in practice in order to execute on Fridays.”

In the final chapter of this meeting between the two quality district foes, the offense stalled in the beginning of the quarter, and it turned the ball over on downs after Martinez was sacked on fourth down. After the sack, the Ranger offense had another solid series but had to settle for a 31-yard field goal, making Vista Ridge’s lead now 49-28. However, thanks to a Lyne reception that went for 56 yards and set them up in the red zone, the Warriors shrunk the gap with a touchdown. A nine-yard reception from Lyne made the score 49-36 after a successful two-point conversion. On the ensuing kickoff, the Warriors elected to go with an onside kick; West Bevins ‘20 perfectly placed his kick where Cesar Badillo ‘21 could recover it, and the Warrior offense got another shot at a score.

“We needed some momentum, being down in the fourth quarter, to have an opportunity to come back, so going out there we gave everything we got for a chance, and it worked out,” Badillo said.

Starting from Vista Ridge’s 49-yard line, the Warriors executed a great scoring drive ending in Martinez perfectly placing a throw to Jeng despite a smothering defender. The late touchdown made the score 49-43, leaving some hope of a miracle comeback still alive; all the Warriors needed to do was recover another onside kick. However, the kickoff unit couldn’t recover the second onside kick, which allowed the Rangers to seal their victory.

The Warriors fall to 2-2 on the season, and a fierce rival in Round Rock looms in the near distance. The varsity football side will face off against the Dragons in the Battle of the Bell on Friday, Sept. 27.