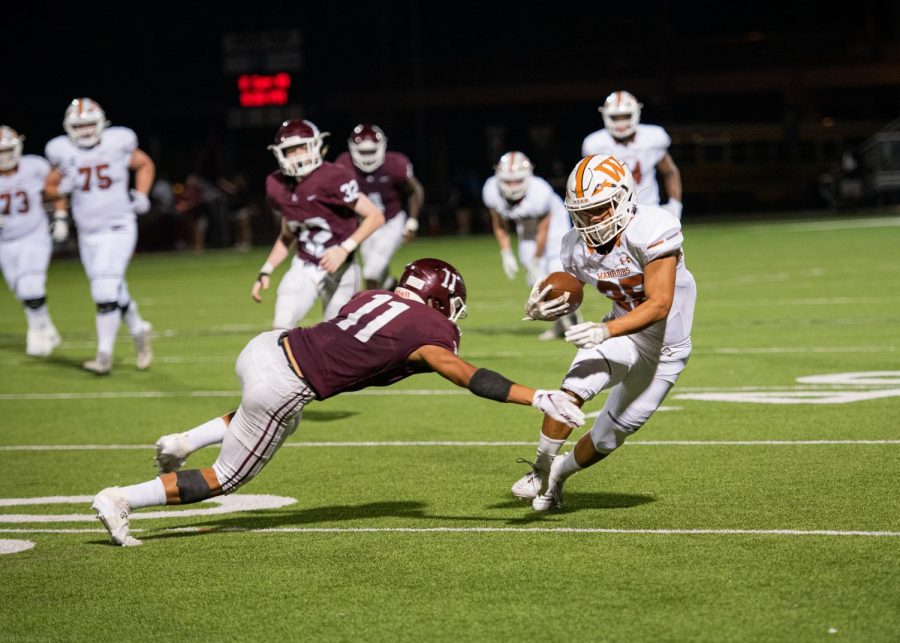 Alec Neville '21 spots the Austin player and slips past him. The play occurred during the third quarter of the game where the Warriors were able to push their score up 15 points.

The stage was set for the varsity football team’s second game of the season: under the lights and in front of the Austin skyline, they had the chance to earn their first win of the young season on Friday, Sept. 6 against the Austin Maroons at House Park. This contest was an offensive shootout, with both squads lighting up the scoreboard throughout the duration of the game, but the Warriors were able to come away from the exciting match with the win, edging out the Maroons 41-39.

“Playing [at House Park] was a great experience,” Drew Goodall ‘21 said. “This is one of the best stadiums we got around the city, and I loved coming down here and playing here tonight.”

The Warrior offense showed out once again, putting up a staggering 504 yards. Quarterback RJ Martinez ‘21 backed up a stellar performance last week against East View with another great outing, going 23-32 for 386 yards passing and three touchdowns.  Running back Nate Anderson ‘21 tallied 125 yards and added two touchdowns on the ground on 20 carries; he’s now posted back-to-back outings with over 100 yards to begin the season. As for the receivers, Oliver Yu had 70 yards on eight catches, Julian Deberry ‘21 recorded three total touchdowns, two receiving and one rushing, and Jace Lyne ‘20 had a touchdown reception of his own.

Defensively, Sam Kainer ‘21 and Connor Cooper ‘20 each had an interception, crucial turnovers that proved to be valuable in an offense-friendly clash. Jackson Metzger ‘21 tallied a sack, and Kam Colvin ‘20, Jaleel Davis ‘20, and Vicente Ochoa ‘20 were all flying around the field as well.

“Everything we did over the week helped us get the dub tonight,” Anderson said. “Just watching film, coming in before and after school, looking at all their techniques and what they do up front, that made a huge difference in the game.”

This game might have been advertised as a battle of the offenses, but it was the Warrior defense who made the first key play of the game. With a five-yard tackle for loss by Davis that forced a turnover on downs, the defense prevented an opening-drive score from the opposition. On the offense’s first play from scrimmage, Deberry took a short pass 90 yards to the house, outpacing every defender in the process to open the scoring at 7-0. After the defense turned away Austin’s offense yet again, Martinez led the Warriors 80 yards down the field on a methodical 12-play drive that ended with Deberry finding the endzone once again. This time, the junior receiver converted on an 18-yard run from a jet sweep, doubling the Warriors’ advantage and increasing the lead to 14-0. However, the defense couldn’t keep the Maroon offense off the scoreboard for a third straight drive, eventually caving and allowing a 21-yard touchdown pass that reduced the deficit to 14-7. After a muffed kickoff return from the Warriors, the Maroons seemed poised to even the score before a wild first quarter came to a close, but Kainer made a great read on a throw to the endzone and made the first interception of the game, ending the quarter in the process.

“We prepared well throughout the week. We studied their gameplan really well and just came out tonight and did what Coach told us to do,” Goodall said.

The second quarter started off in a shocking way, with a fumble giving possession back to Austin after only two plays. From there, the opposition were able to knot the contest at 14-14 after a four-yard touchdown run. After the Warriors had a three-and-out, Austin astonished the Warrior defense on a 61-yard touchdown pass, giving the hosts the lead for the first time; however, the extra point attempt was no good, so the Maroons’ lead was only six, 20-14. The offense responded, though, with an eight-play, 75-yard drive resulting in an Anderson two-yard run into the endzone to take the lead, 21-20. As time was running out in the half, the Maroons engineered a quick scoring drive to put the home team back on top, 26-21, but Austin missed out on the two-point conversion after their pass attempt was punched out. With that, both teams went into their respective locker rooms to regroup and prepare for the second half.

The Warriors received the second half kickoff, but, after a promising 26-yard carry from Anderson, the offense stagnated, eventually turning the ball over on downs. Thankfully, the defense stepped up yet again, forcing a punt. After the change in possession, the Warriors went 91 yards down the field to tack on yet another touchdown. Martinez connected with Deberry once again, this time from 45 yards out, putting the score at 28-26. Austin was able to counter with a touchdown of their own, though, to retake the lead, 33-28. The offense was able to respond to the Maroons’ score with another successful drive. Thanks to a big 36-yard catch-and-run from Brian Lee ‘22 to set them up inside the ten-yard line, Anderson punched it in from a yard out to retake the lead for the Warriors, this time for good, 35-33. All the action through the first three frames of play set up the exciting final chapter of this contest.

“In the end, it came down to execution. We were able to execute better than they did,” Anderson said.

Austin couldn’t answer the Warrior touchdown, with their opening drive of the fourth quarter fizzling out, and the Warrior offense took the field once again. From there, Martinez connected with a wide-open Lyne to extend the lead even further, 41-33. During the Maroons’ ensuing series, the Warrior defense came up huge again, with Cooper leaping to snag an errantly-thrown pass into double coverage to force another turnover. However, the offense turned the ball over on downs to the Maroons, who now had a chance to potentially tie the game with a touchdown and a two-point conversion. Austin was able to put six points on the board after an 11-play series, but, once again, the defense stepped up big time, forcing an incompletion on the two-point attempt that would’ve tied the game. Then, the Warriors recovered the proceeding onside kick, and after a couple of kneels, time expired, with the Warriors recording their first win of the season, 41-39.

“Oh man, the Regime [Warrior defense], they came through tonight. I love those guys, and I never doubted them for a second that they were gonna get that stop for us,” Anderson said.

The Warriors will savor a well-earned victory and then prepare for their next game, the district opener against the Hendrickson Hawks, which will be on Friday, Sept. 13 at the Pfield in Pflugerville.