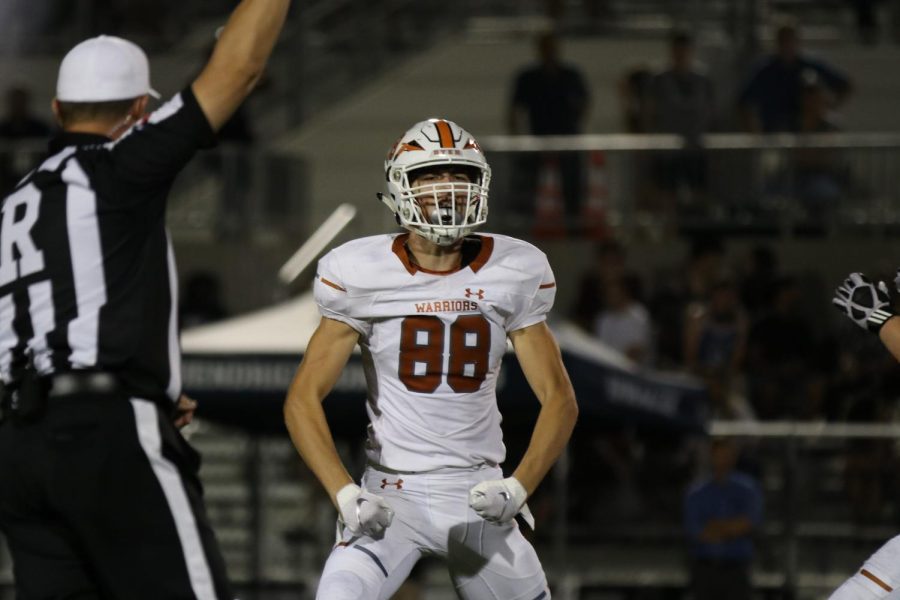 Josef Borkowski ’21 flexes his arms after taking down a member of the Hawks keeping him from scoring. “We finished tackles, we stopped them when we need too and we came out with the win,” Borkowski ’21 said.

With the bands blaring and the crowd roaring, the varsity football team set up for their third game of the season on Friday, Sept. 13. The Warriors faced off against the Hendrickson Hawks at the Pfield in a showdown that came down to the wire. After a first half in which both offenses seemed unstoppable, the Warrior defense was able to flip the script in the second period and shut out the Hawks while the offense scored one last time to finish off the Hawks 28-27.

Quarterback RJ Martinez ‘21 had another strong performance: he went 27-36 to rack up 308 passing yards and three touchdowns in addition to 31 yards on the ground. The four wide outs likewise had productive games: Oliver Yu ‘20 caught five balls for 118 yards and three touchdowns, Julian DeBerry ‘21 had five receptions for 45 yards, Robbie Jeng ‘21 recorded 10 catches for 79 yards, and Jace Lyne ‘20 snagged six balls for 60 yards and the game-winning two-point conversion. Running back Nate Anderson ‘21 was bottled up for part of the night, but he found pay dirt once again with a rushing touchdown.

On the defensive side of the ball, defensive back Conner Cooper ‘20 led the Warriors with nine tackles. Linebacker Drew Goodall ‘21 added two tackles and forced the game-clinching fumble, defensive back Kam Colvin ‘20 and defensive lineman Harris Muhic ‘21 each made four tackles, and Muhic tallied a sack and the fateful fumble recovery as well.

Though the first half would later turn into a shootout, the Hawks’ opening drive was completely shut down. With two huge tackles from linebacker Vicente Ochoa ‘20 and a third down screen pass blown up by Goodall, the Warrior defense forced a quick three-and-out. Unfortunately, despite a 17-yard pass across the middle from Martinez to Lyne, the Warriors’ offense stalled after gaining only one first down. After receiving the ball at their own 14-yard line, the Hawks’ offense found a rhythm and could not be deterred again; they closed out a 10-play drive with a 19-yard score and took the lead 7-0. However, the Hawks’ lead would be short-lived as Martinez uncorked a 75-yard bomb to Yu on the second play of the drive to quickly tie the score at seven. The Hawks quickly returned fire with a 63-yard touchdown run on the opening play of their drive, but a missed extra point limited their lead to 13-7. On the Warriors’ ensuing drive, a screen pass to DeBerry that was taken for 16 yards and an 18-yard run by Martinez set them up with good field position at the end of the first quarter.

Starting at the Hendrickson 36-yard line, a quick carry by Jeng followed by a 13-yard pass to Jeng placed the ball in the red zone. A few plays later, Anderson punched it in from the 2-yard line and the Warriors matched the Hawks’ score of 13. Despite their offensive success, on Hendrickson’s following possession, the Warriors couldn’t hold the Hawks as they quickly marched down the field on a 8-play, 59-yard touchdown drive. However, the Warriors couldn’t be quieted either. After starting with great field position on their own 44-yard line, the offense only needed six plays to respond with a touchdown of their own: a 22-yard dime from Martinez to Yu in the back of the end zone. The Hawks looked to retake the lead immediately, and though they struggled at times during the drive, they would eventually leap over the pile from two yards out and recreate a seven point deficit. As the clock wound down in the first half, the Warriors had a quick three-and-out and the Hawks would run out the remainder of the clock to no avail. A high-scoring first half would finish 27-20 with Hendrickson clinging to a one-score lead.

After receiving the second half kickoff, the Warriors would put together a lengthy march down the field fueled by screens to DeBerry, carries by Anderson, and a few receptions by Lyne and Jeng. However, the methodical drive stalled inside the Hawks’ 10-yard line and the Warriors ultimately came away empty after the field goal attempt heartbreakingly bounced off the left upright. Though the offense couldn’t convert, the Warriors’ defense stepped up in a big way. After allowing one Hawks first down, the defense completely shut them down. With the help of a couple of penalties and a 10-yard sack by Josef Borkowski ‘21, the Hawks were facing 4th and 30. Following the Hawks’ punt, the Warriors struggled offensively and were unable to gain a first down. With that, Hendrickson received the ball and finished off the third quarter by beginning their drive.

“We went into the locker room [at halftime] and we just said we can do better [defensively],” linebacker Jaleel Davis ‘20 said. “We looked each other in the eye and we gave it all-out.”

After a scoreless third quarter, the Warrior defense continued its dominance and quickly brought a halt to what could have been a dangerous Hawks drive. Unfortunately, the offense was unable to capitalize on their possession, and the ball was punted back to Hendrickson. Rising to the occasion once again, the Warriors made a critical defensive stop; with a sack from Muhic and a third-down tackle by Cooper, the Warriors limited the Hawks drive to three yards. With time starting to run out, the Warriors launched into their final drive. After moving the chains once, they were faced with a third and long on their next set of downs, but Martinez scrambled for a 9-yard gain to keep the drive alive. After that, the Warriors shot down the field. With back-to-back catches by Jeng for 17 and 16 yards, the Warriors faced first-and-goal from the Hendrickson seven. After a short carry by Anderson, Martinez hit Yu in the end zone for the six-yard touchdown. Still down by one, the Warriors unhesitatingly went for and successfully scored the two-point conversion on a pass to Lyne to take the lead by one 28-27.

“Shoutout to the Regime [Warriors’ defense] for sure. The defense stepped it up at halftime,” Lyne said. “[On our final drive,] we knew we were going to score, and when we got down to the goal line, we knew it was over when we went for two.”

The game was not yet over; Hendrickson would have one final possession. They grinded out one first-down, but the Warriors’ defense quickly ended the drive. On the Hawks’ final set of downs, pressure forced an incompletion on first down, Jackson Metzger ‘21 batted down a pass on second down, and on third down, Goodall broke through with a strip sack that was recovered by Muhic. With only a minute left, the Warriors knelt out the clock and celebrated their second consecutive victory.

“That’s the defense that we’ve been expecting,“ head coach Anthony Wood said. “To see them play the way we know that they can play, that’s exactly what we wanted. Unbelievable job by our defensive staff and our defensive players. Un-freaking-believable!”

The Warriors will look to build on this momentum on Friday, Sept. 20 against Vista Ridge at Dragon Stadium.