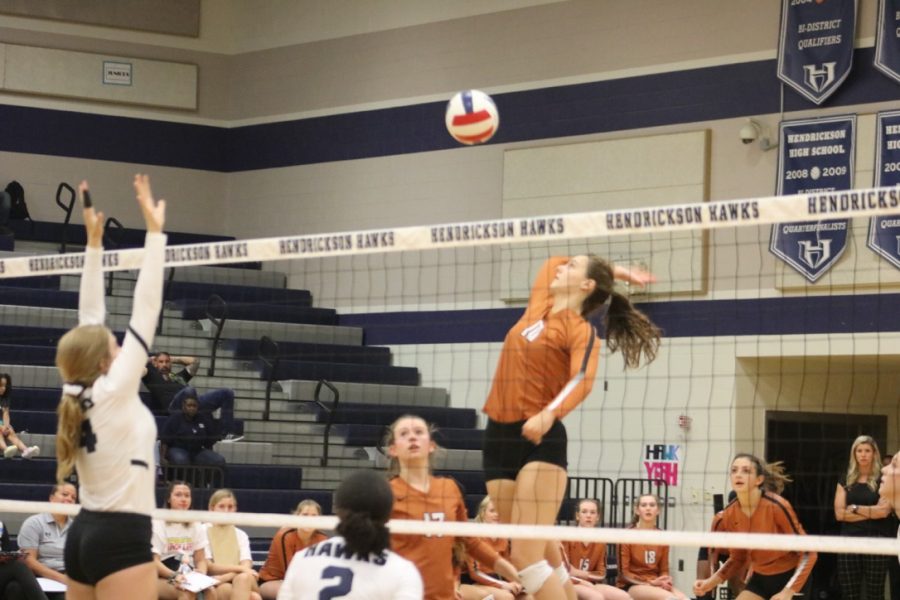 Audrey Quesnel ’20 spikes the ball to the Hawks. With powerful hits, Quesnel was able help the Lady warriors catch up to the Hawks.

On Friday, Sep. 13, the varsity volleyball team played against the Hendrickson Hawks, defeating them 3-1.

“It wasn’t really our best game,” Zoe Menendez ‘20 said. “But we all played strong and did a good job finishing.”

In the first set, Hendrickson was the first to serve and won the first point by hitting off of McKayla Ross ‘22. Erin Fagan ‘22 helped the Warriors win their first point with a kill straight down the line. The Lady Hawks found a rhythm and kept scoring off the Lady Warriors but Audrey Quesnel ‘20 stopped the scoring streak with a kill down the middle. Kenzie Beckham ‘21 and Menendez worked together with serves and kills to help the Warriors catch up to the Lady Hawks. Abby Gregorczyk ‘21 went on a kill streak, setting them right behind Hendrickson. Menendez hit a rightside kill, tying up the game. The Hawks pulled through and widen the point gap by pressuring the Warriors to make an error. The Lady Warriors kept fighting aggressively and managed to tie the score again when Quesnel hit off the opponents block. Both teams fought for a point, keeping each other out of system but the Hawks on the long rally after a kill from their outside hitter. The Lady Warriors made a few more errors until they called a timeout to reset. After the timeout, Gregorczyk and Menendez tied the score with hits from the pins. The Lady Hawks pulled ahead by blocking the Warriors hit. Hendrickson won the first set, 25-22.

“In the first set we weren’t really playing as a team,” manager Emily Price ’21 said. “We were playing more as individuals which cause us to make errors and lose the first set.”

Maddie Gillispie ‘20 started the second set off with a serve but ended out, helping Hendrickson gain their first point. Quesnel won the Warriors’ first point by shooting the ball down the middle. The Hawks separated the score by hitting off the Lady Warriors. Beckham and Gregorczyk helped the team catch up to Hendrickson with dumps and kills, putting the Warriors in the lead. Beckham kept serving aces, managing to find momentum for the Lady Warriors. Abi Rucker ‘20 and Gillipsie kept the defense strong, not letting the Hawks score a point off them. Beckham caught Hendrickson off-guard with front row kills, widening the score further. The Hawks kept making errors, helping the Lady Warriors in the twenty-point mark. Peyton Ferree ‘22 gained game point for the ladies when she hit a straight line kill while Beckham finished the second set by blocking the Hawks outside hitter. The Warriors took the second set, 25-18.

“I started off rough but after [Coach] Nelson told me to get out of my head and relax I came back stronger and made less errors,” Ferree said.

In the beginning of the third set, Hendrickson started with a serve but Ferree gained the Warriors’ first point with a straight line kill. The Hawks gained their first point by hitting off Quesnel. Both teams traded points by making errors, not one team pulling through in points. Beckham kept racking up points by dumping the ball into deep corners. The Hawks caught on and finally stopped her from dumping set ball. Ferree and Ross worked together and kept blocking Hendrickson’s right side hitter. The Hawks took a timeout, trying to stop the Lady Warriors’ momentum. Ferree and Quesnel gained more points for the Warriors by hitting around the opponents’ block. Menendez and Rucker kept adding points by making Hendrickson shank serves and hits. The Hawks finally stopped the Lady Warriors when Gillispie dug a ball but no one connected it. Menendez and Ross blocked out Hendrickson, quickly ending the set 25-13.

“Our defense, blocks, and backrow did a great job defending,” Gillispie said. “We stayed aggressive which helped us take the third set.”

Gillispie started the fourth set off with a service ace off of the opponent’s defense. The Warriors kept the momentum from winning third set, quickly shutting off the Hawks. Hendrickson gained their first point when Ferree made a hitting error. Quesnel kept tipping between the opponent’s defense until they caught on. Hendrickson took a timeout early which helped their outside hitter score off Ross and Menendez. The Hawks trailed behind the Lady Warriors by pressuring the ladies defense on serve. The Warriors stopped Hendrickson’s serves when Beckham tipped the ball deep corner. The opponent gained points by setting to their right side hitter. Gregorczyk racked up points from the outside helping the Lady Warriors pull ahead and hit game point. Menendez finished the game off with a roll shot into the Hawks’ defensive holes, and the Warriors won the last set 25-15.

“We started off slow but we managed to pull out in the end and take the win,” Menendez said. “We need to improve on our serving and serve receive for future games.”

The varsity volleyball team will face against the Vandegrift Vipers on Tuesday, Sep 17.