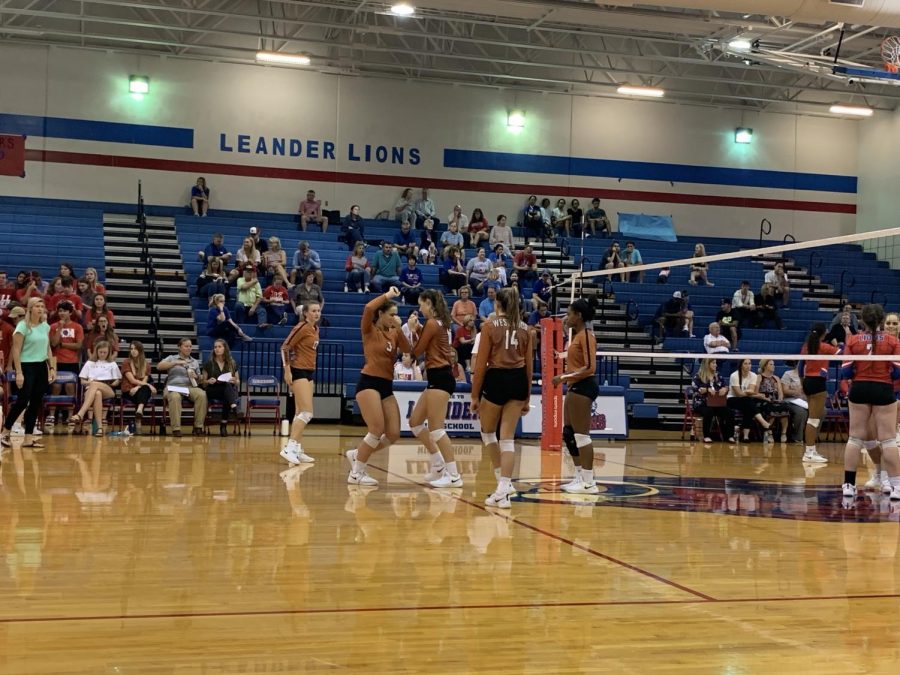 The Warriors do their pre-round celebration and team building exercises. They use special handshakes, chants, and more to encourage each other to do well.

The varsity volleyball team fought the Leander Lions on Tuesday, Sept. 24. Defending their undefeated district season, the team pulled through and won 3-2 in a five-set battle. Both teams had support from large crowds, their cheers echoing in the large gym.

“We could have made less serving and hitting errors but tonight was a great experience for us to learn on what we need to improve on,” Sara Sagues ‘21 said.

Starting the first set off poorly, Kenzie Beckham ‘21 made a setting error from a bad serve reception, giving the first point of the night to the Lions. The Lady Warriors stood strong and fought for points as Zoe Menendez ‘20 got a kill from the right side, earning the first point for the team. Both teams traded points, neither taking a substantial lead. The Lions broke away from the tight score by scoring several service aces and benefitting from errors by the Lady Warriors. Head coach Tara Grant called a timeout, helping the ladies rest and regain composure. After the short break, the Warriors gained a few points from the Lions’ errors and Beckham’s setter dumps. The set became neck and neck again as both teams refused to let the ball touch the ground. The Lady Warriors won the first set, 26-24, when the Lady Lions’ setter tipped the ball out.

“During rallies we could have finished it out better and not let them get so many points,” Sagues said.

Maddie Gillispie ‘20 began the second set off with a serve and Beckham assisted her with a setter dump, scoring the Warriors’ first point. The Lions gained their first point of the set when Gillispie served the ball out of bounds. Peyton Ferree ‘22 and Menendez earned several points with kills off the Lions’ defensive players, making them call an early timeout. The Warriors continued their point streak with help from Audrey Quesnel ‘20 and Abby Gregorczyk ‘21. The Lions repeatedly made mistakes, helping the Lady Warriors push ahead and hit game point. McKayla Ross ‘22 finished the second set, 25-16, off with a tip between the opponent’s blockers.

“I’m proud of how well our hitting went,” Ross said. “We placed the ball well helping us gain a lot of points.”

In the third set, the Lions overpowered the Lady Warriors. Leander made countless kills from their outside hitter and blocks from their middle blocker. Beckham picked up the team with her serves but crumbled under the Lions’ pressure. Leander triumphed and won the third set 25-8.

“The third set was rough because we couldn’t properly pass the ball and we got into our heads,” Ferree said.

The Lions started the third set off with the momentum, but they lost it when Gregorczyk got a kill by tipping into a deep corner. Quesnel managed to keep the lead with blocks and tips from the middle. The Lions quickly caught up with kills from their right side hitter and middle blocker. Menendez and Beckham tipped the ball into open areas on the court, gaining multiple points. The Lions quickly caught on to the Warriors’ offensive plays and blocked out Beckham’s setter dumps and Quesnel’s tips, and the Lions took the lead. Menendez scored back to back with kills and tips from the right side. The Lady Warriors’ libero, Gillispie, dug up the opponents’ hits but no one connected with the ball. The Lions took the third set 25-23 as Gillispie and Lola Fernandez ‘23 tried to dig the outside hitter’s kill.

“Our defense was really scrappy and we could have moved our feet to the ball more,” Sagues said.

Starting off the final set of the night, Quesnel gained the Lady Warriors’ first point when she blocked the Lions’ hit. Rebounding, Leander pulled ahead with kills from their middle blocker and setter. Gergorczyk stopped their rhythm with an outside line kill. Beckham helped the Warriors gain momentum when she kept acing the Lions. The Lady Warriors pushed ahead with kills from Gregorczyk, Quesnel, and Menendez. Beckham finished the game off, 15-11, with an unexpected setter dump making the crowd cheer in victory as the team remained undefeated.

“The final set went really well for us [be]cause we all had the motivation to stay undefeated,” Ferree said.

The varsity volleyball team will face its rival, the Round Rock Dragons, on Friday, Sept. 27 at Round Rock High School.