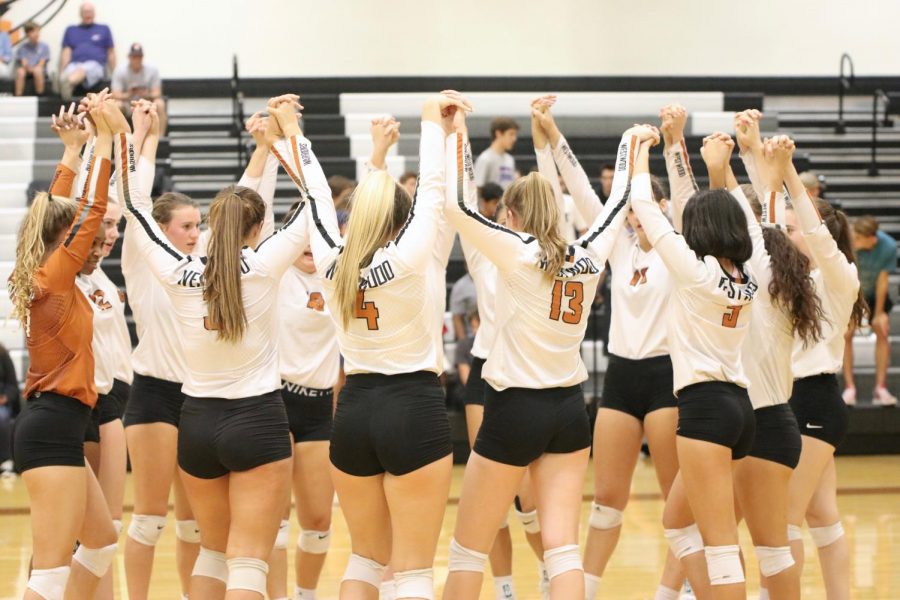 The team holds hands in the air before the game starts. Going into this game, the Lady Warriors wanted to keep their streak of being undefeated.

The varsity volleyball team fought against the Vandegrift Vipers on Tuesday, Sep. 17 in an intense battle for the top spot in District 13-6A, and the Warriors conquered them 3-1. The Tribe supported the Lady Warriors through the whole game.

“Home court was our advantage tonight,” head coach Tara Grant said. “Any time you have a great crowd everyone’s a little more pumped up and excited.”

Maddie Gillispie ‘20 began the match with a serve, but Vandegrift took the first point of the night from a middle kill and scored again when their outside got a clean hit between the Warriors blockers. Kenzie Beckham ‘21 took the Lady Warriors’ first point by setting the ball to the deep corner, avoiding the Vipers’ defense. Zoe Menendez ‘20 and Audrey Quesnel ‘20 racked up points and took the lead with blocks. Abby Gregorczyk ‘21 and a Vandegrift outside hitter jousted for a point but Gregorczyk overpowered the opponent, winning the point. The Vipers caught up with kills from their outside hitter. The Warriors picked up momentum when Erin Fagan ‘22 and McKayla Ross ‘22 repeatedly blocked Vandegrift’s right-side hitter. The Lady Warriors went on a point streak when the Lady Vipers couldn’t keep up with the fast tempo. Menendez helped the ladies hit the 20-point mark when she made a service ace. Vandegrift picked themselves up and slowly caught up by running a tricky offense. The Warriors called a timeout to help the ladies regroup which helped Quesnel get a kill down the middle to go up 21-13. The Lady Vipers didn’t back down and threw the Lady Warriors out of system, gaining the advantage and taking the point. Gregorczyk took set point for the Warriors when she hit off Vandegrift’s blockers. Affected by the pressure of the Lady Warriors on set point, the Vipers’ middle blocker attempted to tip deep corner, but ended up out. The Tribe went crazy as the Warriors won the first set 25-16.

“We have been working really hard this season and have been looking forward to play against Vandegrift,” Gillispie said.

At the beginning of the second set, Vandegrift started off with a serve and gained their first point when Gregorczyk shanked the serve. Menendez helped the Warriors gain their first point when she struck the ball down the court. The Vipers took the lead when Fagan attempted to tip the ball but was ruthlessly blocked. The Vipers increased the margin when the Lady Warriors made sloppy mistakes. During an intense rally, Vandegrift’s libero received the ball too close to the net which caused Gregorczyk to slam the ball down, making the crowd roar. The Warriors finally caught up when Quesnel served an ace between the Vipers’ defensive line. The Lady Vipers took the lead again when the Lady Warriors shanked their hits. Vandegrift tripped up and made back-to-back mistakes leading the Vipers to take a timeout with a 13-12 lead. The Lady Warriors repeatedly made errors helping Vandergrift push forward in points. Fagan and Ross worked together and blocked out the Lady Vipers’ attackers. Despite that, Vandegrift became the first to touch the 20-point mark when Gregorczyk served the ball into the net. Menendez aggressively slammed the ball down the attack line scoring for the Warriors. Both teams defensive line kept digging up with ball but Menendez stops the long rally with a roll shot. Beckham assisted the team by tipping the ball away from the Vipers’ defense to bring the Warriors score to 20. The Vipers captured set point when Beckham failed to dump the ball. Vandegrift ended up winning the second set 25-20 when Beckham failed to dump the ball again.

“Our defense was on top of everything tonight,” Gillispie said. “Sometimes we would make a mistake but we shook it off and prepared for the next rally.”

Gillispie started off the third set with a serve but Vandegrift took the first point when their middle blocker tipped over the Warriors defensive block. Menendez helped the team earn their first point when she blocked the Vipers’ outside hitter. Both teams traded points, and not one team backed down from the other. The Lady Warriors found a rhythm when Ross got a huge block, but Vandegrift called an early timeout down 9-6 to stop the Warriors rhythm and regroup. Quesnel and Ross kept blocking out Vandegrift’s attackers while Beckham, Menendez, and Gregorczyk killed the ball between their defense. The Vipers avoided the Lady Warriors’ pressuring blocks with tips, which earned them a few points to catch up. Quesnel used Vandegrift’s playstyle and helped her team push the score. The Warriors hit the 20-point mark when a Lady Viper served into the net. Ross got back-to-back blocks against the Vipers’ pin hitters. Menendez hit the ball into Vandegrift’s block but ended up on their side, causing the crowd to chant as the Lady Warriors hit set point. Tipping into deep corner, away from the Vipers’ back row and defense, Menendez finished the third set. The Warriors won the set 25-17, which hyped up the crowd.

“We had so much energy tonight and we clicked as a team,” Menendez said.

The fourth set started out really close as both teams stayed with each other, not letting one get the upper hand. The Warriors went on a point streak when Beckham led the offense and assisted her hitters in kills. Vandegrift called an early timeout down 8-4 when they started making mistakes. The Vipers regrouped when their back row attacker managed to get a kill between the blocks. They soon caught up with the Warriors with kills from their middle blocker. The Lady Warriors called a timeout with the score tied at 14 to help the ladies stay focused. Both teams traded points again until the Warriors jumped ahead when Menendez and Ross blocked Vandegrift’s outside and middle hitter. Broken under the intense pressure, a Viper attacker hit the ball out which helped the Lady Warriors gain an advantage. Menendez took set point for her team when she roll shot the ball into the opponent’s defensive holes. The crowd cheered and backed up the Lady Warriors as Menendez hit off the Vipers’ block and the ball slowly rolled on top of the tape to land on the Lady Vipers’ side. The Tribe went wild as the Warriors defeated Vandegrift in the fourth set, 25-19.

“Every game in this district is a battle and if we show up like we did tonight I think things are gonna look great good for the future,” Grant said.

The varsity volleyball team will face against the Vista Ridge Rangers on Friday, Sep 20.