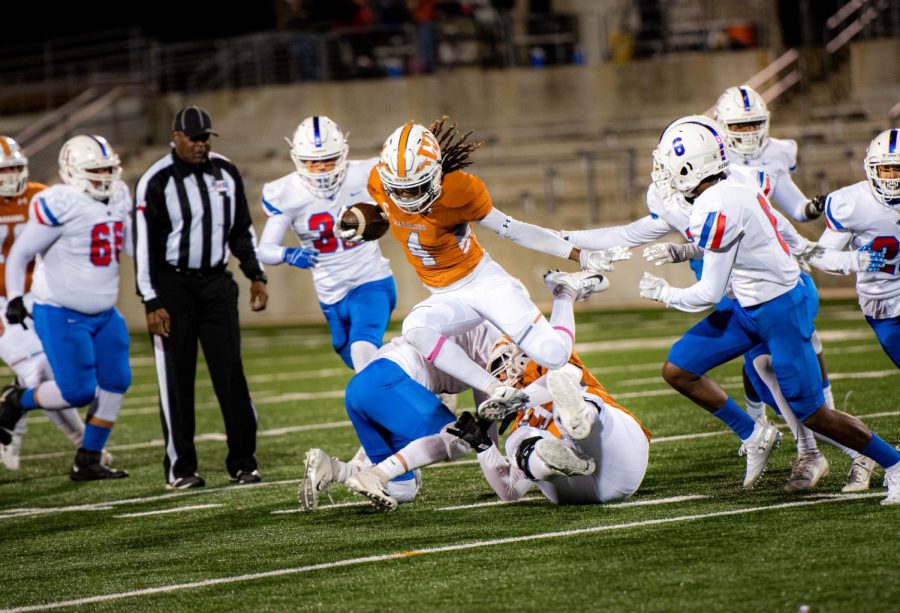 Back to the game, Nate Anderson ’21 jumps over players. Anderson have achieve a 10-yard run bringing the warriors closer to another touchdown.

Varsity Football Dominates Leander for a 49-20 Victory on Homecoming

By Vikram Joshi and Ishika Samant

In the Homecoming game, the varsity football team sought to bounce back from a tough loss against Vandegrift and top Leander under the bright lights of Kelly Reeves Athletic Complex. Despite the strong winds and sudden drop in temperatures on Friday, Oct 25, the Warriors were supported by a roaring crowd and the team gave them plenty to cheer for. From the start, the Warriors took control of the game and they never let go of the reins, cruising to a 49-20 victory.

“[The win] felt good, and guys needed confidence going into next week so getting that win was huge and the way we played on both sides of the ball, and special teams, really showed what we are really about and we are just trying to carry that onto next week and the week after that,” Quarterback RJ Martinez ’21 said.

Leander was the first to possess the ball, but they didn’t hold onto it for very long; after one first down, repeated penalties drove them back and quickly forced a punt. Then, it was the Warriors’ chance to score; though they took the field on the 6-yard line, the Warriors ignored the poor field position and simply marched across the turf. With a 14 play, 94 yard drive that was composed of 56 yards through the air and 38 on the ground, the Warriors ate up the clock and took the lead 7-0. After another short possession by Leander, the Warriors offense struck again with two big plays speeding them down the field to another score: a 34-yard pass to wide receiver Julian DeBerry ‘21 and a 35-yard touchdown run by Martinez.

To open the second quarter, Leander’s drive stalled again with a stop by linebacker Vicente Ochoa ‘20 on third and ten. The Warriors showcased their passing attack on the following drive; with 80 yards through the air that included a 24-yard catch by Yu, a 21-yard catch by Jeng, and an 18-yard catch by Anderson, the Warriors flew down the field for another touchdown, this one punched in by Anderson. Leander’s next possession looked promising, but a botched snap and handoff was recovered by defensive end Josef Borkowski ‘21, and the Warriors were back on offense. This time, however, the Warriors went three-and-out. Leander capitalized on their final possession of the half and despite three goal-line stands by the Warriors’ defense, the Lions ran it in on fourth-and-goal to close out the half.

To open the second half, the Warriors took the field and didn’t miss a beat despite the break. The opening drive highlighted their rushing attack as Anderson had seven carries for 58 yards before the drive was capped off with a 17-yard strike to Jeng. The defense also opened the half strong as Nathan Potter ‘21 and Dylan Vorpahl ‘20 had back to back sacks on the first two defensive snaps. The Warriors quickly got the ball back, and the offense scored on one play with a deep ball to Yu who left his defender behind for an easy touchdown. Leander managed to respond with a touchdown, but the extra point was blocked to keep the score at 35-13. The Lions then attempted an onside kick in the hope of finding a rhythm, but the kick bounced out of bounds. On the Warriors ensuing possession, a pass to Jeng started and finished the drive with a 37-yard touchdown.

“[We just focused on] doing our job, and when we execute right, good plays come our way,” Jeng said.

In the fourth quarter, the Lions once again tried to march down the field, but the Warriors notched another takeaway with a sideline pick by Malachi Woodard ‘20. To get some points off of the turnover, the Warriors shot down the field, finishing the possession with a 40-yard touchdown pass to Yu. On Leander’s next possession they were able to run in a touchdown, but the result of the game was set. The Warriors chewed the rest of the clock, and the game finished 49-20.

“We are in a must-win situation right now. If we want to continue to play after the regular season ends, we have to keep winning.” head coach Anthony Wood said. “Any time you can get a victory, it feels good. I don’t care if it’s by one point or by 30. It’s all about winning and we were able to do that, so I was very pleased with how the game turned out tonight.”

The varsity football team will attempt to build on this momentum and begin a winning streak with their match against Stony Point on Friday, Nov. 1.