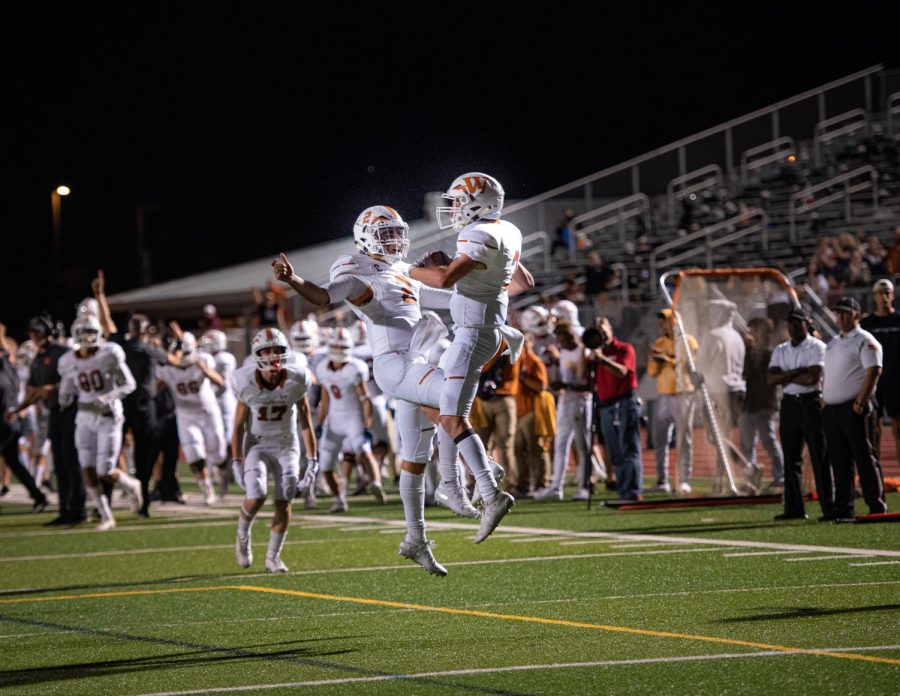 Jace Lyne ’20 celebrates with RJ Martinez ’21 after a touchdown. After the building anticipation, Martinez completed a pass to Lyne which resulted in the first touchdown for the Warriors and brought the score to 10-14.

By Sourav Dhar and Ishika Samant

Surrounded by a sea of black in Monroe Stadium, the varsity football team looked to hand the Vandegrift Vipers their first loss of the season in a district clash on Friday, Oct. 18. However, the Vipers proved to be too strong in this match, and Vandegrift rode a dominant second half to deal the Warriors a 42-17 loss. The Warriors kept it close throughout the first half, but the Vipers, thanks to good red-zone defense and backed by a raucous home crowd, were able to pull away.

Quarterback RJ Martinez ‘21 threw for 311 yards and two touchdowns in this contest, and Nate Anderson ‘21 added 62 yards on the ground. The receiving corps had another productive outing; Julian Deberry ‘21 recorded seven catches for 110 yards, Robbie Jeng ‘21 had 40 yards on five receptions, and Jace Lyne ‘20 and Oliver Yu ‘20 scored a touchdown each.

The scoring opened quickly in this contest with Vandegrift only needing 65 seconds to go 52 yards to the house on their opening drive, quickly putting the Warriors behind 7-0. The Warriors attempted to answer, methodically marching the ball down the field in response; however, the offense was stifled just outside the red-zone, eventually turning the ball over on downs. Vandegrift made the Warriors pay after that, scoring another touchdown to make the score 14-0 in favor of the Vipers. Starting from their own 20-yard line, the offense was able to produce a scoring drive this time, propelled by a Deberry 56-yard catch-and-run in which he broke a couple of tackles. Eventually, the drive ended with a 23-yard field goal from West Bevins ‘20 to make the score 14-3. Bevins’ field goal marked the end of the scoring in the first quarter.

“We studied a lot of film. We watched about two weeks’ worth of film, so we knew what they were going to do up front and coverage wise, and it was just up to us to execute,” Anderson said.

After the field goal, the defense was able to force a punt thanks to three straight incompletions. The Warriors were able to slowly wear down the Vandegrift defense for another score, this time going 81 yards on 13 plays. With Lyne’s four-yard touchdown reception, they cut the Vipers’ lead to four, 14-10; Lyne’s touchdown came with only 36 seconds left in the half. However, Vandegrift only needed two plays and 19 seconds to counter with a touchdown of their own, with a 62-yard rush to the house making the score 21-10 as the first half ended.

The Warriors tried to cut the lead to single digits to begin the second half, but a turnover on downs on their opening drive gave the ball back to Vandegrift in Warrior territory. Once again, this doomed the Warriors, and the Vipers utilized the run game effectively en route to another touchdown, increasing Vandegrift’s lead to 28-10. The Vipers’ score would be the last points of the third quarter.

The fourth quarter of action began in the middle of a Vandegrift possession in which they had already driven down into the red zone, and the Vipers struck once again, this time on the first play of the frame, to make the score 35-10. The Warriors were able to respond, though, with an 11-play, 75-yard drive capped off by Yu’s 24-yard touchdown reception to cut the deficit to 35-17. However, Vandegrift only needed four plays to strike once more after they recovered an onside kick as a 41-yard touchdown reception increased the Vipers’ lead to 42-17. The Warrior offense was able to march down the field again, but, like many other times in the match, they weren’t able to convert on fourth down, which removed all hope of another score; Vandegrift drained the rest of the clock and ended the game after that.

“I felt like we played hard but we need to execute more consistently and play better as a team,” cornerback Sam Kainer ‘21 said. “It was a tough loss, but all we can do is learn from this game and start looking forward to Leander.”

The Warriors drop to 3-4, and will look to get back to .500 as they get set to square off against the Leander Lions for Homecoming on Friday, Oct. 25.