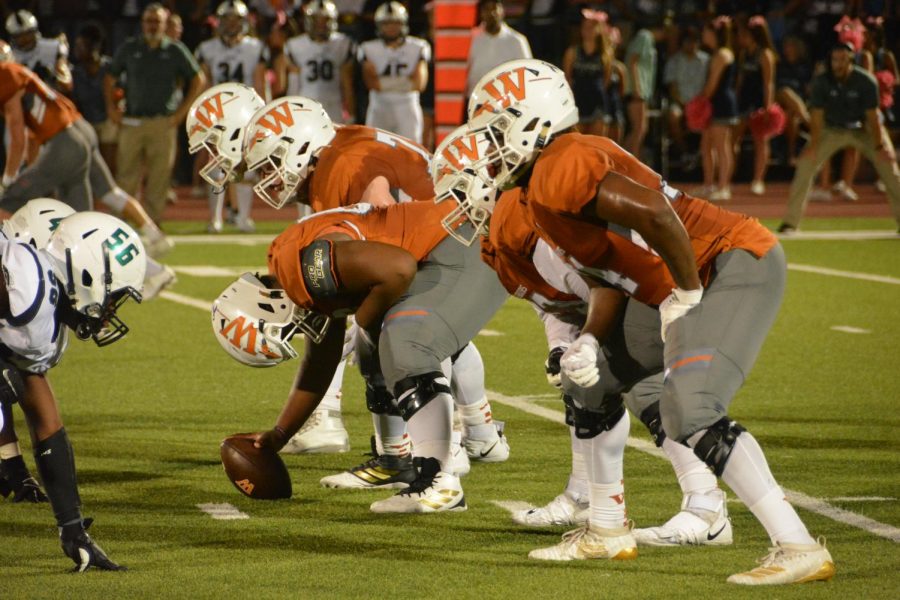 Awaiting the quarterback’s signal to snap the ball, center CJ Hill ’21 and the offensive line hold their stances. The offensive line’s solid play was very important in this contest, allowing the Warriors to rack up five touchdowns and 287 yards on the ground.

Under the lights at Dragon Stadium for the third week in a row, the varsity football team looked to snap a two-game losing streak with a showdown against McNeil. Both offenses featured powerful rushing attacks, but that didn’t keep the game from turning into a shootout that came down to the wire. Although both teams racked up an impressive amount of points, the Warriors’ defense had the last word with a game-clinching interception to finalize the score at 38-34.

With a smashmouth ideology on offense and a dominating offensive line, the Warriors relentlessly ran the ball down the Mavericks’ throats. Running back Nate Anderson ‘21 turned 39 carries into 170 yards and added a touchdown. Quarterback RJ Martinez ‘21 also got involved in the ground game, carrying the ball 16 times for 117 yards and four touchdowns. Through the air, Martinez went 15-28 passing for 178 yards. The receiving core had a relatively quiet night, but Tomas Henry ‘21 had six receptions for 71 yards and Robbie Jeng ‘21 added four receptions for 68 yards.

On the defensive side of the ball, Jaleel Davis ‘20 and Vicente Ochoa ‘20 made plays around the field, recording 6½ tackles and 5½ tackles, respectively. Nathan Potter ‘20 came through with a huge forced fumble in addition to his 2½ tackles and EJ Wiley ‘21 recovered that fumble and also made two tackles. Connor Cooper ‘20 made the essential game-ending interception in addition to his three tackles.

The game began in stunning fashion: although the Warriors kicked off, they beat the Mavericks to the ball to take over at the McNeil 23-yard line. With great field position, the Warriors quickly drove down to the 9-yard line, but due to a pair of incomplete passes, they had to settle for a field goal; West Bevins ‘20 chipped it through the uprights, and the Warriors took a 3-0 lead. However, that lead was to be short-lived: on the Mavericks’ third offensive play, they broke through for a 72-yard rushing touchdown. The Warriors struggled on their ensuing possession; after one first-down, penalties and a negative run set them up with third-and-long and forced a punt. In danger of being down two possessions, the Warriors stepped up on defense and Potter forced a fumble that was recovered by Wiley on the Warriors’ 3-yard line. Despite poor field position, the Warriors went to work, pounding away at the Mavericks defense. With a methodical 14-play, 97-yard drive, the Warriors retook the lead 10-7 on a two-yard power run from Anderson. Unfortunately, the lead failed to last as the Mavericks took a run play 73 yards to the house. But on the extra point, the Warriors made a block that would limit the Mavericks lead to three and prove impactful down the stretch.

“Before the game, coach told me that we were going to run the ball and I was going to have it,” Anderson said. “My whole mentality was to put the team on my back and drive the offense down the field and that’s what I did. Big shoutout to the five guys up front, it couldn’t have happened without them. They killed it tonight.”

In the second quarter, the Warriors’ first drive stalled but after a punt from McNeil, theoffense would retake the field and, on the ensuing drive, the lead. With an 80-yard series that featured Martinez, who threw for 40 yards and rushed for another 30, the Warriors went up 17-13. The defense then stepped up to halt the Mavericks’ drives after allowing only two first downs. With the Mavericks going for it on fourth down, Davis made a crucial tackle to return the ball to the Warriors’ offense. The Warriors drove down the field, but time ran out and they were forced to attempt a 55-yard field goal which went wide left.

During halftime, the winner of the sock and underwear drive competition between the two schools was announced; since the Warriors had collected about 800 more pairs of socks and underwear than McNeil, McNeil Principal Amanda Johnson was forced to wear a Warriors jersey.

“It’s always nice to not have to wear the McNeil jersey,” Principal Mario Acosta said. “We raised 3900 and they raised 3100 so together that’s 7000, so that’s a really big deal for the clothes closet in Round Rock. Apparently, that keeps them stocked for the whole school year so it’s a really good thing that the two communities do together.”

After an entertaining performance from the SunDancers and the Westwood Warrior Marching Band, the Warriors’ offense took the field to open the second half. During an imposing drive that kept the ball on the ground, the Warriors traveled 75 yards in nine plays and increased their lead to a two-possession game, 24-13. McNeil quickly responded and finished their drive with a rushing touchdown of their own.The Mavericks also tried to catch the Warriors napping with an onside kick, but Drew Goodalll ‘21 recovered it to set the Warriors up with great field position. The Warriors’ offense kept its rhythm flowing and ran through the Mavericks defense for another unstoppable drive, capped off by a 4-yard rushing touchdown by Martinez. However, the Mavericks still had a couple of tricks up their sleeve: with a play that involved the quarterback lateraling to a receiver and the wideout tossing it back to the QB, McNeil scored a touchdown and cut the Warriors’ lead to 31-27 to end the third quarter.

In the final period of the game, the Warriors struggled initially and were forced to punt. On the Mavericks’ following possession, they charged down the field and ran it in to take the lead 34-31. But with plenty of time left on the clock, the Warriors launched a single-minded march down the field; with 42 yards rushing from Anderson and a 19-yard touchdown run from Martinez, the Warriors would set the score at 38-34. With a minute and a half left in the game, the Mavericks needed a touchdown to score. However, when they took a shot down the field, it was Cooper that came away with the game-sealing interception.

“We knew that we had to come up with a big play [on the last drive] and we came through,” linebacker Vicente Ochoa ‘20 said.

The Warriors knelt out the clock and celebrated a well-earned victory thanks to an unyielding offense and a clutch defensive stop.

“[On the final drive], we believed that [the defense] could do what they were coached to do,” Coach Wood said. “They came out and they did a great job.”

After a bye week, the Warriors will return on Friday, Oct. 18 in a game against Vandegrift at Monroe Stadium.