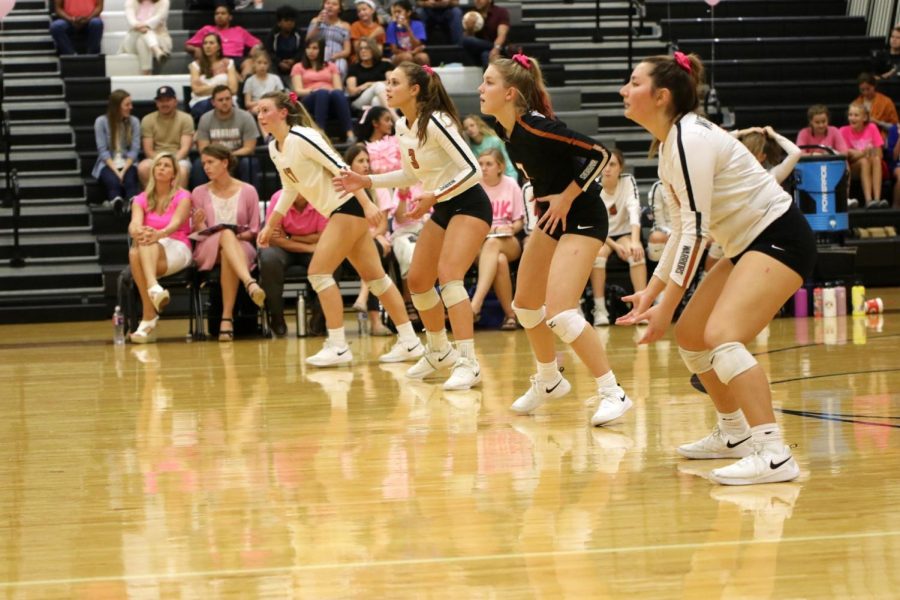 The varsity volleyball team took on the McNeil Mavericks on Friday, Oct. 4 for the second time this year and won once again 3-0. Along with the game, the school hosted a raffle for Dig Pink day, and all proceeds went to support breast cancer awareness.

“This was our second round playing them so we watched film and adjusted to what we did last time, and practiced,” middle blocker Audrey Quesnel ‘20 said.

The Warriors started strong with outside hitter Peyton Ferree ‘22 scoring a point after diving to save the ball. Quesnel spiked the ball right at the net, surprising the Mavericks and gaining another point, but McNeil began to catch up. The Warriors didn’t let them get ahead though and won the set 25-21.

“I thought my hitting was really good; I hit the shots I was told to. We did a scouting report on McNeil to find the shots that would work,” outside hitter Abby Gregorczyk ‘21 said. “My defense was really scrappy; I made a few errors, but I feel that overall I played really well.”

For the majority of the second set, the Warriors had almost twice as many points as the Mavericks. Setter Kenzie Beckham ‘21 sent the ball into an empty spot in the Mavericks defense and got a point. The Warriors won the set 25-15 when the Mavericks failed a serve.

“I think once we worked really hard and came together as a team we had them, it was really good and a lot of fun to watch and to play,” middle blocker Madeleine Shrull ‘21 said.

Right side hitter Zoe Menendez ‘20 started the last set with a point, which was followed by five more in a row. Gregorczyk gained the Warriors another point with a powerful hit, and Shrull made the winning shot with a spike right at the net, winning the set 25-19.

The Warriors will take on the Hendrickson Hawks next on Tuesday, Oct. 5.