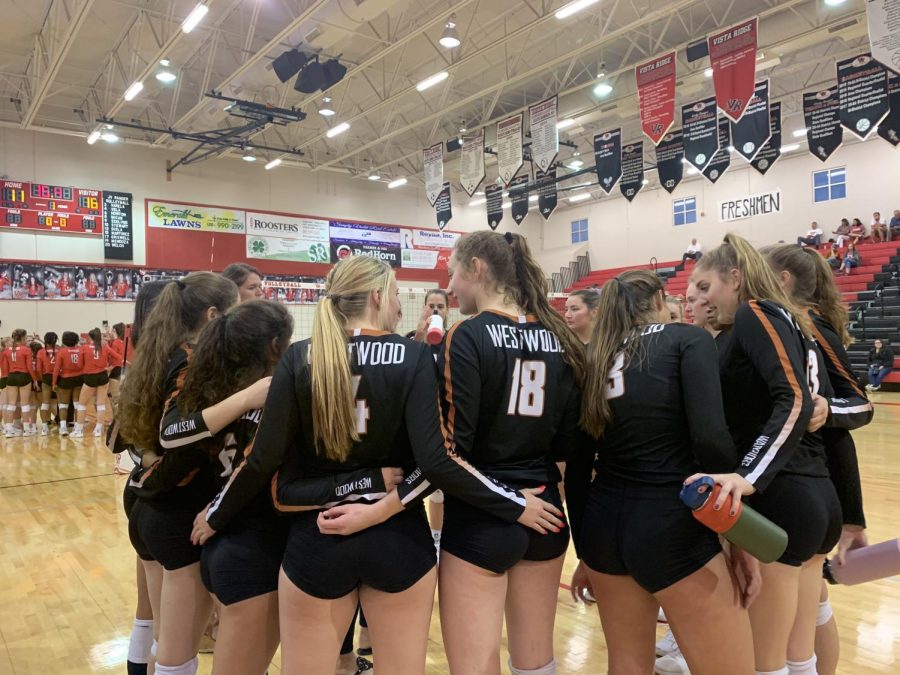 The Lady Warriors huddle up after Vista Ridge called a timeout. Head coach Tara Grant discussed with the athletes about their plays.

The varsity volleyball team traveled to Vista Ridge and conquered the Rangers 3-0. The showdown helped the ladies take the title of district champs of District 13-6A.

“This game held a lot of pressure for us because we wanted to secure the title [of] district champs during this game,” Zoey Menendez ‘20 said. “We played great tonight. We played all out and played with confidence the whole time.”

Beginning the first set, the Warriors gained the first point of the night when one of Vista Ridge’s pin hitters tipped the ball out of bounds. The Rangers bounced back from their error and scored their first point with a kill from the right side. Both teams exchanged points with kills and errors. Abby Gregorczyk ‘21 broke the tight score with a kill between the defensive block, which started a rhythm for the Warriors. After a fierce rally of both teams battling for the point, McKayla Ross ‘22 and Menendez stopped the Rangers from scoring with a pressing block, shaping the score to be 8-6. Audrey Quesnel ‘20 quickly racked up points with a combination of kills from the front row and powerful serves. Kenzie Beckham ‘21 finished the first set with a serve ace, ending the set 25-13.

Vista Ridge began the second set with a serve but Quesnel scored a point for the Warriors with a kill that was aimed into the deep corner. Menendez scored back-to-back points with serves and kills from the back row. Both teams contributed in a long rally with Maddie Gillispie ‘20 and Gregorczyk adding digs to the play, but the Rangers secured the point with a kill. Abi Rucker ‘20 and Quesnel stacked up the points with a combination of serves and kills, making the score 12-3. The Rangers broke through Rucker’s serves and began to earn points from the Warriors’ mistakes. Quesnel stopped Vista Ridge’s momentum with a tip aiming to avoid the defense. The Rangers made a hitting error, aiding the Lady Warriors to steal the second set 25-17.

“Our serve-receive still needs to be improved. There [were] a few points where it was hard for us to side out,” Beckham said.

The Warriors started the final set by pushing the points with the assistance of Jessica Lane ‘21’s serves, Menendez’s roll shots, and Quesnel’s kills from the middle. With clear cut communication, Beckham smoothly ran the offense at a fast pace, not letting the Rangers have a break. Gillispie went on a roll with her serves, acing out the opponent. Blocking out Vista Ridge’s hits, Madeleine Shrull ‘21 quickly snatched set point for the Warriors. Cracking under the pressure, a Vista Ridge pin hitter tipped the ball out, helping the Warriors win the game 25-16.

“We all have the same end goal in mind,” Rucker said. “At the beginning of the season we all wrote down goals and one of them was to be district champs and to make Playoffs because last year we barely made it. Our other goal was to get revenge on the teams we lost to last year.”

The varsity volleyball team will face the Leander Lions on Friday, Oct. 25 during Parent Night and Homecoming Night at 5:30 p.m.