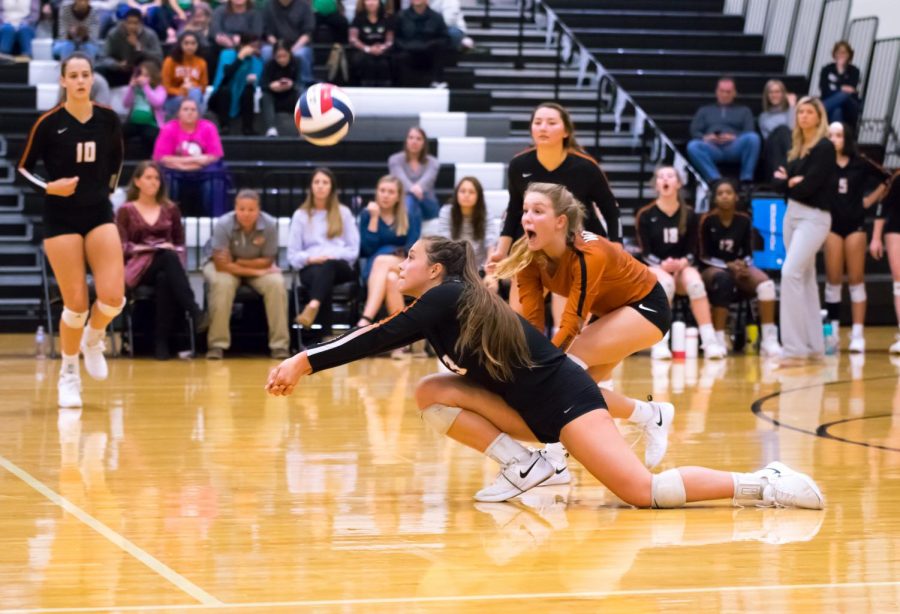 In a match against Leander last season, Abby Gregorczyk ’21 gets down low to return the Lions’ serve. The varsity volleyball team will begin district play on Friday, Sept. 25 at home against McNeil.

The varsity volleyball team played against the Leander Lions on Friday, Oct. 25 and won 3-2 during Parent Night. The game day theme was dedicated to the parents who took their time and money to support their daughters to play on the court.

“We struggled with our passing and serving, making a lot of unforced errors we didn’t need and our lack of effort made tonight sloppy,” Jessica Lane ‘21 said. “We thought we were going to win and have it in the bag made us not push as hard as we could and they came back and stole a few sets from us.”

Starting the first set slow, both teams traded points with serving and hitting errors. Abi Rucker ‘20 broke apart the tight score with her serves, helping the Warriors gain the lead. Following Rucker’s serves, Audrey Quesnel ‘20 and McKayla Ross ‘22 blocked out the Lady Lions while kills were made by Peyton Ferree ‘22, Abby Gregorczyk ‘21, and Zoe Menendez ‘20. Quesnel assisted the Lady Warriors by getting a kill, ending the first set 25-22.

Beginning the second set, Maddie Gillispie ‘20 and Menendez racked up points with serves, causing Leander to take an early timeout. The Lions stayed behind the Warriors but decreased the margin by a couple of points, causing head coach Tara Grant to call a timeout and help her players fix their gameplay. Menendez added multiple points to the scoreboard with kills and serves. Gregorczyk finished the second set, 25-21, by getting a kill off of the opponents block.

The third set was a fierce battle as both teams fought for points. The Lady Warriors couldn’t stop Leander’s powerful serves and middle blocker. Menendez stopped the Lions’ momentum with kills and blocks, which picked up the pace and energy on the Warriors side. Lane added points to the Warriors score with her serves, forming the score to be 17-17, while Gillispie saved the ball multiple times. Despite the Warriors efforts to keep the ball up, Leander took the third set 26-24.

“In the third set our passing was bad and we missed a lot of serves,” Lane said.

After winning the third set, the Lions held onto their momentum and stayed ahead with their serves and kills from their pin hitters. Menendez striked back with a variety of serves and kills. The Warriors slowly caught back up to the Lions with serves from Lola Fernandez ‘23, Gillispie, and Lane. The final score turned out to be 25-22 as the Lions stole another set.

“In the fourth set we were playing catch up. We were down by a lot but we slowly caught up,” Lane said.

Entering the final set, Menendez, Gregorczyk, and Ferree gained multiple points with kills while Quesnel blocked out the Lions. The Warriors pulled through and finished the night undefeated as Gregorczyk used a sly roll shot over the opponents block, ending the score 15-12.

The Lady Warriors play against the Round Rock Dragons for Senior Night and their last district game on Tuesday, Oct. 29 in the Field House.