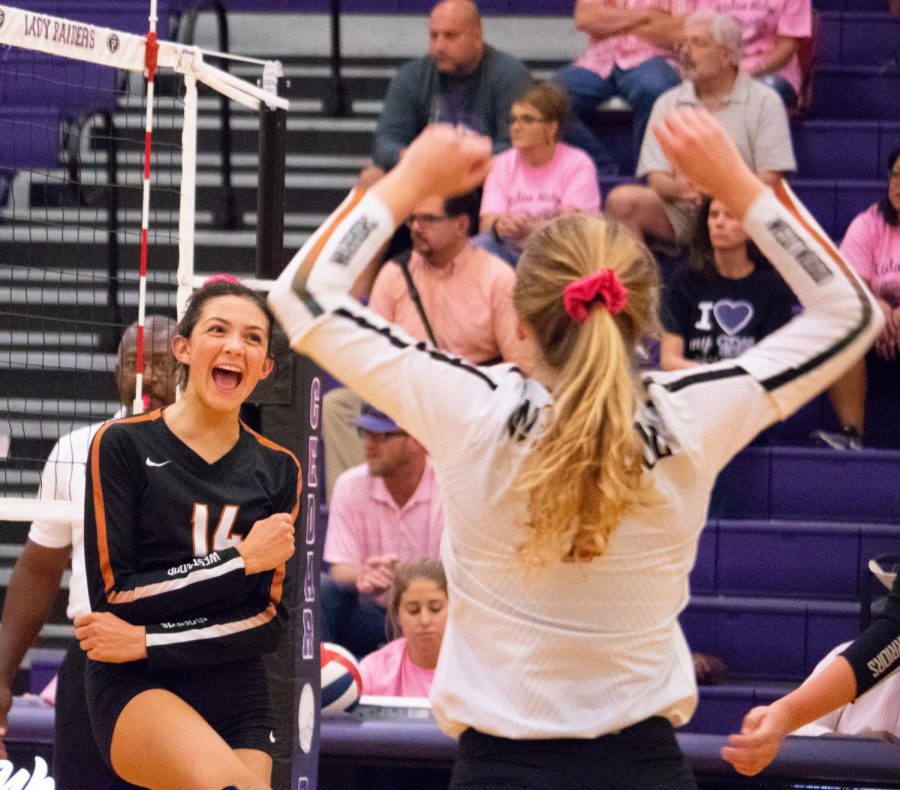 Zoe Menendez ’20 celebrates with captain Maddie Gillispie ’20. They had just scored a critical point near the end of the first set.

The varsity volleyball team played against the Cedar Ridge Raiders on Tuesday, Oct. 8, during an away game and won with a final score of 3-0. The ladies wore pink scrunchies honoring breast cancer awareness for the Raiders’ Pink Out game.

“We went into this game trying to have a strong blocking game and in the first set we struggled, [but] then we picked it up towards the end,” middle blocker Audrey Quesnel ‘20 said. “We could have read our hitters better and press[ed].”

Starting off strong, Quesnel scored the first point of the night with a slide down the middle. The Lady Warriors maintained a strong lead with the assistance of right side kills from Zoe Menendez ‘20 and Kenzie Beckham ‘21 serves and sets, 15-10. Aiding the Warriors, the Raiders made continuous errors from their front row. McKayla Ross ‘22 finished the first set, 25-16, by pressing and blocking out the Raiders’ middle blocker.

Keeping the momentum from the second set, Quesnel scored back-to-back points with kills shooting between the Raiders’ guarding blocks. The Lady Warriors made a few errors, but kept their heads high and continued to score points from pin hitters Menendez and Peyton Ferree ‘22, 17-10. Unable to keep up with the Warriors’ fast-paced tempo, the Raiders’ defensive line kept shanking the ball, earning more points for the Lady Warriors. Anna King ‘20 shut down the Lady Raiders with a right side kill, earning the second set for the Warriors, 25-14.

“Our blocking could have improved but we did what we needed to do and put the ball away to finished,” King said.

Beginning the final set, Menendez snatched the first point with a kill from the right side. The Warriors pushed ahead with hits from Quesnel and Ferree. However, the Raiders soon caught up with their serves and stopped the Warriors from earning more points, with the score being 7-6. Abby Gregorczyk ‘21 and Maddie Gillispie ‘20 halted the Raiders’ actions with digs, aiding Menendez and Ross to score. Gregorczyk ended the last set, with a clean outside kill, with the score being 25-21.

“In the third set I really brought the power, and I fixed my errors and got a lot of kills,” Gregorczyk said.

The varsity volleyball team will play against the Hendrickson Hawks on Tuesday, Oct. 15 at home for Future Warriors Night.