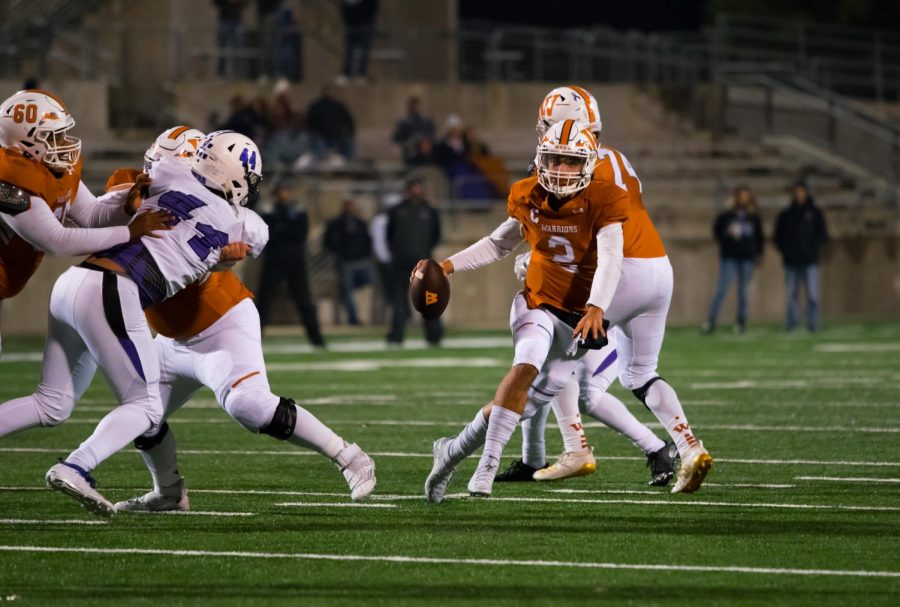 Running with the ball, RJ Martinez ’21 looks to make a pass. The pass intended for wide receiver Joseph Kubelka ’20 ended up incomplete.

On a breezy Friday evening, varsity football concluded its 2019 season against the Cedar Ridge Raiders. Despite already being eliminated from playoff contention, they battled from the very first snap to the last whistle in a game that will go down in the record books. In a matchup in which both teams combined for over 1500 yards of offense and almost 150 points, the Raiders defeated the Warriors, 77-69 in the season finale.

Although the Warriors ended the game on the losing side, quarterback R.J. Martinez ‘21 put up record breaking numbers. He completed 50 of his 76 passing attempts for 606 yards and six touchdowns, rushed 13 times for 193 yards and three touchdowns, and even caught one of his own passes for 2 yards. With his 76 pass attempts, Martinez set a new University Interscholastic League (UIL) Texas state football record for most pass attempts in a game, moving over former Tivy High School, Texas A&M, and Cleveland Browns quarterback, Johnny “Johnny Football” Manziel himself (75). He also tied former Flower Mound High School and West Virginia quarterback, Paul Millard, and former Allen High School, Oklahoma, and current Arizona Cardinals quarterback, Kyler Murray’s state record for most completions in a single game (50).

“It’s very humbling to know that I have great guys around me,” Martinez said. “Having Coach Wood to help me achieve those accolades and joining such elite company is such a blessing. Knowing that our hard work isn’t going unnoticed is truly special.”

Although Martinez led the way, the receiving corps also paved a route for offensive success. Senior Oliver Yu had a career day with 17 catches for 224 yards and two scores. Robbie Jeng ‘21 also had a massive day with 16 catches for 148 yards and 3 touchdowns and added a one-yard score on the ground. Jace Lyne ‘20 added on9 catches for 112 yards and a score and Nate Anderson ‘21 added 57 more yards on the ground on nine carries and caught five passes for 86 yards. Connor Cooper ‘20 led the way on defense with 7 tackles.

After a quick three-and-out and a Cedar Ridge score to open the game, the Warriors were quick to answer as they used a big 35-yard pass to Jeng to set up a 35-yard touchdown run by Martinez to even the score at 7-7. The two sides then traded scores, Cedar Ridge using their elite run attack, and the Warriors using a seven play, 70-yard drive, capped off by a 6-yard score by Martinez. The Warriors were unable to stop the Raider offense which scored 13 unanswered through a quick score, an interception, and a long touchdown throw to make the score 27-14. However, the Warriors blocked the extra point to keep a point off the scoreboard.

Aided by a controversial call that called back an interception, the Warriors stormed down the field to open the second quarter after a 38-yard run by Martinez set them up in the red zone. Martinez found Yu in the corner of the end zone to make it a one score game. The defense needed a stop for the Warrior offense that was moving up the field with ease, but their struggles continued as they gave up another quick score by the Raider run game to make it 34-21. The Warriors got the ball back and tried to cut the margin before halftime, but penalties and drops gave the ball back to Cedar Ridge. Pinned deep in Warrior territory, Jackson Metzger ‘21 came up with a clutch sack as time expired in the half to keep the score at 34-21.

Cedar Ridge got the ball to start the second half and wasted no time getting into the end zone, burning through the Warriors’ secondary on two long passes to make it a three score game. The Warriors answered yet again with great blocking upfield on short passes that resulted in a 25-yard catch and run by Jeng making the score 41-28. Head coach Anthony Wood decided they needed the ball back right away and went for an onside kick halfway through the third quarter. His risk paid off as kicker West Bevins ‘20 kicked the ball in just the right spot so that Kam Colvin ‘20 could force a fumble on the kick and give the ball back to the Warriors. They capitalized on their gamble and got back into the end zone thanks to 14 and 18-yard catches by Joseph Kubelka ‘20 and a 1-yard touchdown run by Jeng, which brought the score to 41-35. The two teams would trade touchdowns every drive until the fourth quarter, with Cedar Ridge continuing to tear through the Warrior defense and quick answers from Martinez and the Warriors offense. Anderson started to make an impact on the Warriors game plan, getting big rushes and catches out of the back field. With his help they were able to match Cedar Ridge’s scores, with Martinez adding a 52-yard score to his performance and a 1-yard throw from Martinez to Jeng, his third of the game. The scoreboard read 56-49, ensuring a fourth quarter for the ages.

“We prepared all week, this was the last game of the season and we’ve already established a lot of chemistry between us,” Jeng said. “RJ knows what he has to do to get the ball to us and our guys did a good job picking him up.”

The Raiders just continued to rack up points and showed no signs of stopping. After an interception by the Cedar Ridge defense and back-to-back touchdowns, The Warriors were now down 70-49, and there was little hope they would come back. But they weren’t done just yet. Yu started to make his presence felt as he racked up 5 catches for 43 yards and Jeng added another 21-yard score. Coach Wood called for another onside kick, and once again, his gamble paid off as Malachi Woodard ‘20 recovered the kick and Martinez found Jace Lyne ‘20 for his first score, pulling within one score of the Raiders, 70-62. Needing a stop, the Warrior defense finally got the stop they needed, with big tackles from Colvin and EJ Wiley ‘21, forcing a three-and-out. Unfortunately, the Warriors were unable to keep the ball in their hands during a promising drive as Martinez fumbled the ball, giving the ball back to Cedar Ridge. They took advantage of his mistake, scoring again, making the score 77-62. With only three minutes left, the Warrior offense got the ball back and quickly marched down the field, thanks to a 34 yard catch by Anderson, a 19-yard catch by Lyne, and a one-yard score by Yu. The score was 77-69 when Bevins came in trying to give the ball back to the Warriors for a third time. Before the game, he didn’t have a successful onside kick attempt all season. That changed on Friday and in his attempt to do it again, Bevins sent the ball off the tee, and took a big bounce up, and into the hands of Conner Cooper ‘20. The student section erupted with cheers, as the Warriors now had a chance to tie the game. This was Bevins’ third successful onside kick attempt which paved a path for the Warriors to come back

“It’s not really that difficult to kick, but to getting the perfect bounce is critical,” Bevins said. “I’ve been practicing and have gotten a lot better at them since the start of the season and our guys did a great job of getting to the ball quickly.”

Unfortunately for the Warriors, their golden opportunity turned to disaster. On the very first play of the drive, Martinez coughed up the ball trying to escape Cedar Ridge pressure, thus giving the ball back to the Raiders. After a game that featured over 1500 yards of total offense, 146 points, a record breaking performance,  and an incredible rally, the Warriors fell to Cedar Ridge, 77-69 to conclude their 2019 season.

“That’s what this team is all about,” Coach Anthony Wood said. “We’ve been in these spots before and have fought adversity all season. This team just keeps believing and really showed the true definition of fight but we have to find a way to win in these situations. It was just a couple small mistakes that cost us a win and that’s just football, but I couldn’t be more proud of the guys.”