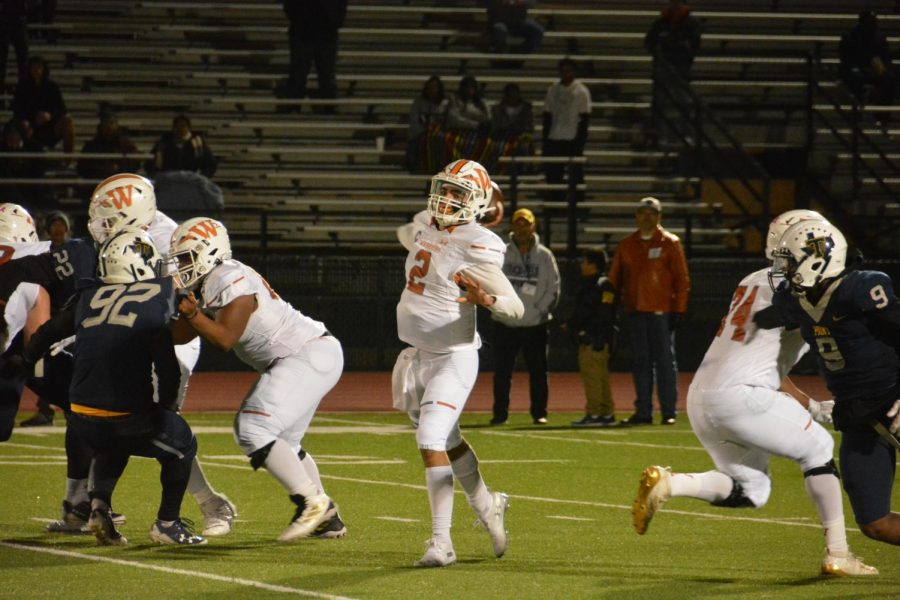 The varsity football team fought against Stony Point on Friday, Nov. 1 at Dragon Stadium, and hoped to gain a second win after dominating Leander in the previous week’s homecoming game. The Warriors went up against a tough line of opponents and lost with a score of 45-28.

With a good start, the Warriors scored first. Quarterback RJ Martinez ‘21 passed the ball to wide receiver Robbie Jeng ‘21 who ran across the field, gaining a successful amount of yardage. Once the ball was passed to Julian DeBerry ‘21, he had no trouble reaching the endzone to score a touchdown, followed with an extra point kicked by West Bevins ‘20. Once Stony Point gained possession of the ball, defensive back Kam Colvin ‘20 tackled multiple opponents along with Connor Cooper ‘20. Stony Point eventually scored their first TD and an extra point. Once the Warriors gained possession of the ball, there were multiple incomplete passes followed by the tigers gaining a strip sack. This led to the Tigers recovering the fumble to score another TD with an extra point. By the end of the quarter, the score was 14-7.

“We need to come together and channel our anger and turn it into positive things instead of getting negative towards each other,” Cooper said.

The Warriors were quick to score another TD at the beginning of the second quarter with the help of Martinez, Jeng, and running back Nate Anderson ‘21 who drove the ball into the endzone. After the Warriors switched to defense, the Tigers failed to gain any points. Ryan Lass ‘21 gained an interception, and receivers Jace Lyne ‘20 and Jeng progressed the ball further down the field. Unfortunately, they were unable to gain any additional points. The ball was later intercepted and the Tigers kicked for a successful field goal. The score was an 17-14 in Stony Point’s favor at the end of the quarter.

“In the first half, we played really good on defense,” Lass said. “We stopped them when we needed to, but we need to work on our [teamwork] cause were not close together right now.”

In the second half of the game, the Tigers gained possession of the ball. Cooper and linebacker Jaleel Davis ‘20 tackled several opponents making Stony Point lose yardage in the process. Once the Warriors gained possession of the ball, they failed to get close enough to the endzone and the ball was recovered from a fumble by Stony Point. LB Vicente Ochoa ‘20 ran multiple opponents out of bounds. The Tigers later gained another TD with an extra point. The Warriors then made a comeback right after with Lyne scoring their third TD followed by an extra point. The score was left 24-21.

At the start of the last quarter, Stony Point scored another touchdown and the extra point. The Warriors tried to move toward the endzone, but a fumble led to the Tigers once again gaining possession of the ball. Stony Point gained another three TDs with three extra points. Jeng, DeBerry, and Martinez accelerated the ball across the field while Yu scored the last TD and extra point of the game. The scoreboard was left with a final score of 45-28, with Stony Point winning.

“I think we all played with a lot of intensity,” DB Alex Rusch ‘21 said. “It was really great to see that from everyone. [What we need to work on] is mainly finishing, finish what we have to do to get done, finish breaking down, making out tackles, finish off plays well.”The varsity football team plans to make a comeback against Cedar Ridge on Friday, Nov. 8 at the Kelly Reeves Athletic Complex.