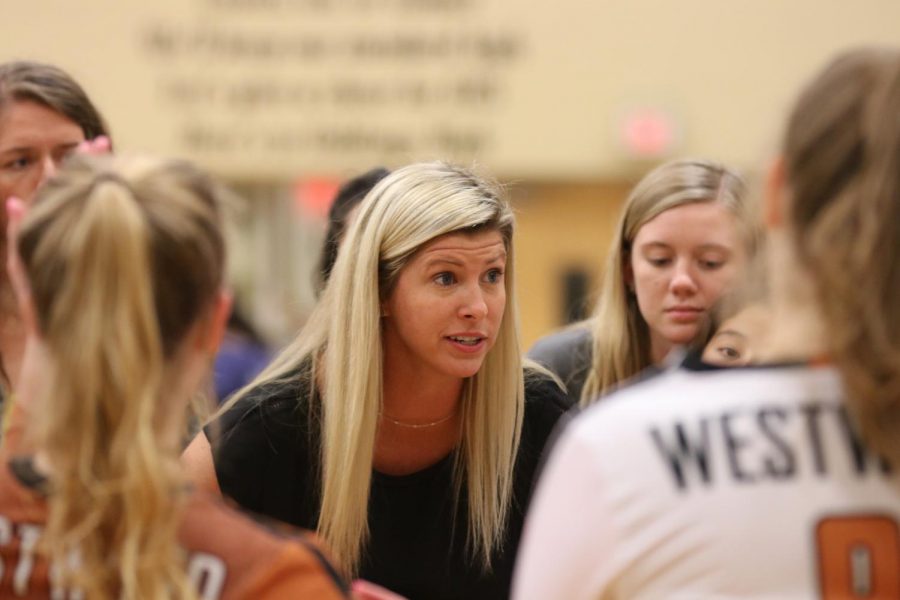 Head coach Tara Grant motivates her team in a timeout as Tomball Memorial starts to catch up. The Warriors scored multiple points after the timeout.

The varsity volleyball team traveled out of the area to play against the College Park Cavaliers for Area Playoffs on Friday, Nov. 8. Sub-varsity team athletes and parents made the effort to travel out to Brenham to support the Warriors. The team overcame the Cavaliers 3-1 and were given the title of Area Champion.

College Park began the first set of the night with serves which limited the Warrior offense, who weren’t able to score. Points were added to the Cavaliers scoreboard as the Lady Warriors struggled to find a rhythm. The ladies soon found a flow when Peyton Ferree ‘22 shot kills past the opponents’ blocks; meanwhile, Zoe Menendez ‘20 dug up multiple balls to keep the rallies going. Audrey Quesnel ‘20 pushed the Warriors ahead and earned the momentum when she got a kill from the middle. The ladies managed to stay ahead as Abby Gregorczyk ‘21 equally played offense and defense but the Cavaliers soon decreased the margin, 18-17, when they earned points from the Lady Warriors’ errors. Quesnel and Kenzie Beckham ‘21 shut out the Cavaliers with their defensive block which handed the team set point. Menendez finished the first set off, 25-18, with a serve ace.

“We excelled at our blocking, we had a little dip for awhile, but we eventually brought ourselves back up and took the set,” McKayla Ross ‘22 said.

Carrying the momentum from the first set, Maddie Gillispie ‘20 started off with a serve and scored but the Cavaliers’ setter shot back with a dump. Both teams traded points, not letting one team race ahead, but Beckham widened the lead with her powerful serves and tactical sets. Staying in the lead, Menendez used a variety of kills while Quesnel got kills from the middle. The scoreboard became tight again as the Warriors couldn’t effectively receive College Park’s serves and hits. The Cavaliers continued to get blocked out by Ross and make errors at the net, which caused them to take their first timeout of the set at the score 20-16, with the Warriors leading. College Park scored a kill from the middle after the timeout but Menendez bounced back and got a kill from the right side. The opponent handed set point to the Warriors with an offensive error at the net. The Lady Warriors won another set, 25-18, when an attack from Beckham caught the Cavaliers off guard.

Wanting to steal the third set, College Park used their serves to force the Lady Warriors out of system, which earned multiple points for the Cavaliers. Trying to put points on the scoreboard, the Warriors desperately made an effort but would come up short, which caused head coach Tara Grant to take an early timeout, as the team was down 7-3. Ross supported the Warriors as she earned back-to-back kills from the middle, but despite her efforts, the Cavaliers stayed ahead with their tricky offense. Finding holes in the opponent’s defense, Menendez and Quesnel got kills, placing more points on the scoreboard. College Parks continued to rack up points from their pin hitters, not letting the Warriors gain a rhythm. The Cavaliers managed to steal the third set, finishing with a score of 25-17, when their outside hitter shot a sharp cross.

“We win the first two sets and we think we are going to win the third set without even trying so we lay back and get comfortable,” Gregorczyk said. “A lot of teams in our district and area will fight because they don’t want their season to end and we need to be prepared for that.”

Beginning the fourth set, Gillispie started off with a serve as Ferree blocked out the Cavaliers back-to-back. Ahead of the opponent, Menendez and Quesnel used their skills to make several kills while Beckham ran a fast offensive tempo. The score was soon tied up as College Park used their pin hitters to score points. Both team fought in giant rallies while Gillispie, Gregorczyk, and Abi Rucker ‘20 popped up the ball multiple times. Separating the tight score, Quesnel pulled the momentum to the Warriors’ side as she got back-to-back kills from the middle. Rucker used her dynamic float serves to limit the Lady Cavaliers’ offense, which cause the opponent to take a timeout at the score 15-12, as the Lady Warriors kept the lead. After the timeout the Warriors continued to score points with the assistance of Quesnel, Beckham, and Menendez but College Park used their right side hitter to slowly catch up to the Lady Warriors. Menendez helped the team emerge victorious at the score 25-21 when she got a kill from the right side. The ladies celebrated and took pictures while friends and family congratulated the team for the victory.

“We had a timeout and Coach Grant said push a couple of more points and that’s all for the whole weekend, we get to rest. We knew to push at every point and we would be done and the game will be ours,” Gregorczyk said.

The Lady Warriors will move onto round three of playoffs, the regionals round, against Klein High School on Tuesday, Nov. 12.