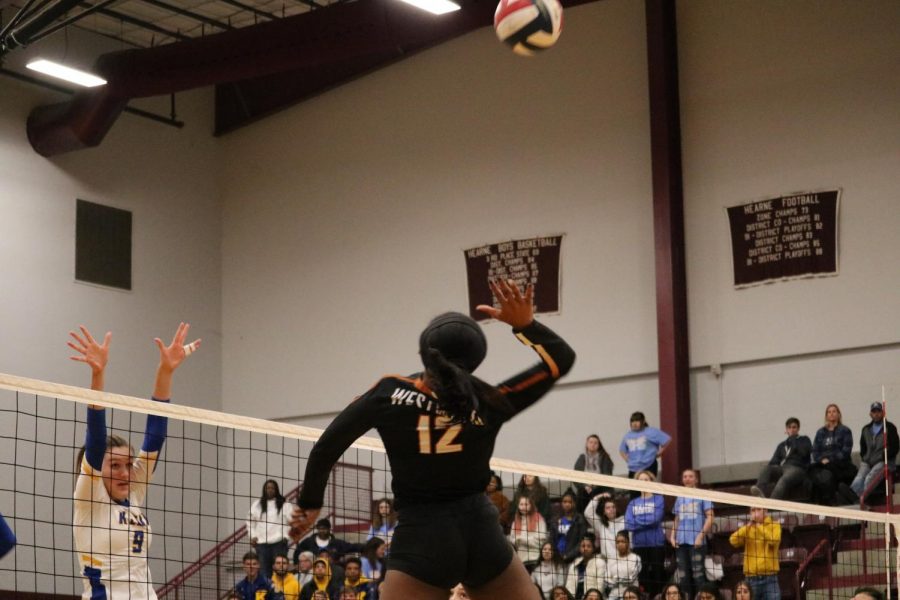 Peyton Ferree ’22 hit the ball towards the opponent and the play ended with the Warriors earning the point. Even though she is a sophomore, Ferree has shined a lot in games.

The varsity volleyball team traveled out to Hearne to battle against the Klein Bearkats for the Regional round on Tuesday, Nov. 12. The Tribe, parents, and sub-varsity athletes made the effort to travel far to support the ladies. Unfortunately, the Lady Warriors lost 3-1 in a heated battle.

“Our team had a very successful season with winning the Showcase Tournament and staying undefeated in district with the help of Coach Grant. This team had a lot of chemistry which is one of the main reasons we went so far,” Audrey Quesnel ‘20 said.

Maddie Gillispie ‘20 served the night off with serve, but despite her efforts, Klein claimed the first point with a kill from the outside. Bouncing back, Kenzie Beckham ‘21 used a setter dump to claim the Warriors’ first point. Both teams traded points, not letting one team rise up, but Klein tore apart the tight score with kills from their middle blocker. Not backing down, Quesnel and Zoe Menendez ‘20 got multiple kills off the opponents’ defense but Klein continued to stay ahead as the score shaped to be 16-13. Abby Gregorczyk ‘20 and Quesnel scored more points with a variety of tips and kills but couldn’t catch up to the Bearkats when they hit set point with a kill from the outside. The Warriors were determined to take this set as Quesnel and Beckham got kills and tips while Menendez skillfully placed her fast serves, but Klein overpowered the ladies when they got a kill off Beckham’s block, ending the first set 25-20.

Starting the second set, Klein used their powerful serves to limit the Lady Warriors’ offense, who struggled to find their first point. Menendez broke through Klein’s defense with a line kill from the right side, earning the Warriors’ first point. Peyton Ferree ‘22 and Quesnel used kills to climb up the scoreboard to catch up to Klein but couldn’t take the lead as Klein used their powerful hitters. Gillispie, Gregorczyk, and Abi Rucker ‘20 took control of the Warriors defense and managed to save several balls to continue the tiring rallies. Klein was able to hit game point with an ace and finished the second set, 25-14, when Gregorczyk cracked under pressure and hit the ball out.

“Honestly, I didn’t have any regrets this game. I knew I gave it my all since it was my last game. I was very focused and I knew what I was doing and what I should do on the court,” Menendez said.

Fighting for a set, Ferree and Quesnel started the third set off with by shutting out Klein’s middle blocker, quickly establishing a rhythm for the Warriors. The Bearkats pushed ahead of the Lady Warriors with a combination of tips and kills but Quesnel used her skills to shut down the opponent. In the lead, Rucker used her dynamic float serves to restrain Klein from scoring more points while Menendez used an array of roll shots, tips, and kills to rack up more points to the Warriors score. Stealing a set, Menendez used a roll shot aimed at sharp cross and ended the third set 25-17.

“We realized our season was about to end if we didn’t push, we didn’t want to give up our season just yet. In the third set we turned it around and pushed to win,” Gillispie said.

Beginning the fourth set, both teams fought in long and rough rallies with fast-tempo offenses and steady defenses. The Warriors took the lead as McKayla Ross ‘22 blocked out the opponents’ attempted kills, but couldn’t stay ahead as Klein overpowered them with their pin hitters. The Lady Warriors tried to catch up to the Bearkats with kills from Quesnel and Menendez but didn’t succeed as Klein stole the final set, 25-14, with a shanked serve.

“It was really sad because us seniors have been here for four years and we were really close,” Quesnel said. “For some of us it was our last time playing volleyball, but it was also our last time with Coach Grant and with the team. Our group had a lot of chemistry and its sad that it’s all gone.”