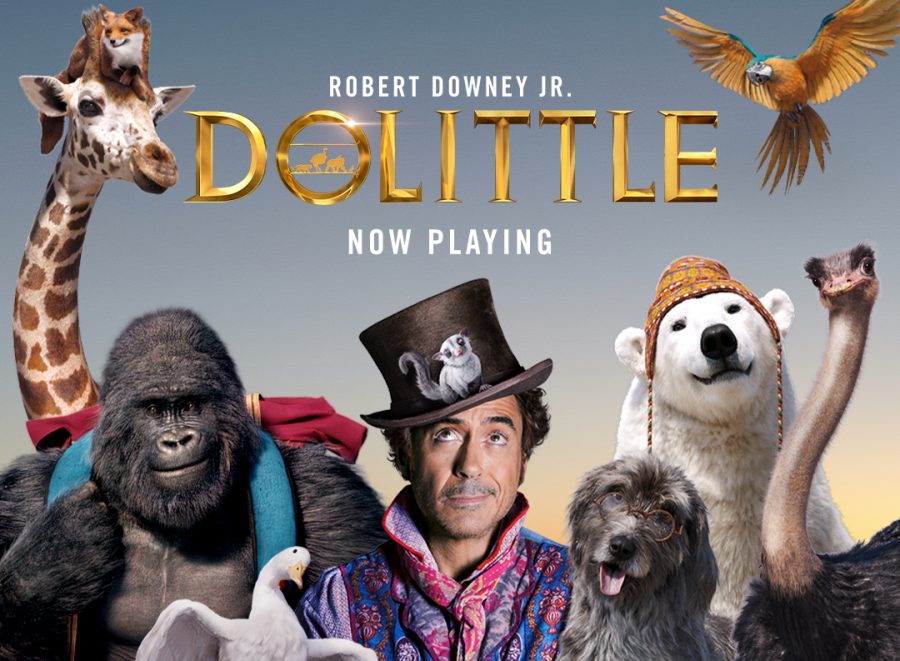 Robert Downey Jr. poses with his animal companions on the whimsical poster for the film 'Dolittle.' Photo Courtesy of Universal Pictures.

Classic Book ‘The Story of Doctor Dolittle’ Takes to Theaters

Loosely based on the book The Story of Doctor Dolittle, a new movie starring Robert Downey Jr., Dolittle has come to theaters. It follows a strange, eccentric veterinarian who goes on a quest to find a magic fruit to save an ill Queen Victoria. This movie could have certainly used some work, but it wasn’t as bad as lots of reviews made it out to be.

Dr. Dolittle is a famed, highly skilled, and talented veterinarian who lives with his animal friends on a sanctuary. His sanctuary used to be a veterinary clinic until his wife died at sea. Depressed by his wife’s death, he shuts down his clinic, and breaks off all contact with humans. One day, a boy named Tommy Stubbins is out hunting with his uncle and cousin, when he accidentally shoots a squirrel. He brings the injured squirrel to Dr. Dolittle. At the same time, a young princess named Lady Rose is at Dr. Dolittle’s place to bring a message from the ill queen, stating that she wants to see Dr. Dolittle. Dr. Dolittle saves the squirrel, and after much pestering from his animals, decides to visit the queen. When examining the queen, Dr. Dolittle finds out that she ingested nightshade and the only way to cure her is to find a magical fruit with healing powers called the Eden fruit. Dr. Dolittle, his animal friends, and Stubbins, who want to be Dr. Dolittle’s apprentice, set out on an adventure to find this magical fruit. I thought it was a cute and fun adventure to watch.

The animation in the beginning was a great start to the film. The style of the animation resembled illustrations found in a children’s book, strongly alluding to the book the movie was based on. The animated versions of the characters looked a lot like the actual actors and CGI animals while also retaining the aspect of a children’s book illustration. The narration by Polly, Dr. Dolittle’s parrot, during the animated beginning also added to the children’s book aspect, resembling a story being read aloud.

Dr. Dolittle’s eccentric and odd ways were excellently portrayed. I enjoyed seeing the way the animals worked together to do many things, such as surgery, operating a ship, planning an escape, and more. The animals felt more like a team of humans with different abilities. This movie did a good job at giving the animals personalities. Anyone would be able to recognize the humorous ways of Kevin the squirrel and the great leadership of Polly. However, Chee-Chee the gorilla’s character development could have been a little more dramatic. The way he overcame his anxiety when fighting Barry the tiger felt very sudden to me. The fight was supposed to be some sort of life altering event that would make Chee-Chee more confident, but it didn’t seem like that. There just wasn’t enough drama in the fight to depict an alteration like that. If the music was more dramatic and there were some fight scenes in slow motion, or some other element that could have made the fight more dramatic, it would have helped make this development seem more like a change than something that just happened.

Some events happened pretty suddenly without any explanation whatsoever, or were just poorly executed. After Dr. Dolittle escaped prison on King Rassouli’s island and his ship got destroyed, he didn’t get arrested again. He was just there at the port contemplating what to do with himself, but there was no one arresting him again, and there’s no explanation as to why Dr. Dolittle is off the hook. When Barry and Dr. Dolittle fight, it goes from fighting, to suddenly becoming a therapy session where Barry confesses the issues he has with his mother, and abruptly back to fighting again. When Dr. Dolittle was fighting the dragon in the cave of the Eden fruit, he talked about knowing the pain the dragon was going through, referring to the loss of a loved one, and said he could fix it. However, the next scene is him treating the dragon’s stomach ache, which was never previously mentioned. It was like the topic of losing a loved one was forgotten about. These types of scenes lead to a poorer portrayal of the story, which was a grievance of many reviews. However, it didn’t completely ruin the movie.

The story was fun, the characters were portrayed well, and the animation in the beginning was artistically very good. Despite the poor quality plot portrayal at certain points in the movie, the film was enjoyable. If you want something to watch just for fun and to relieve some stress, watch this movie because it isn’t as bad as most of the reviews make it out to be.

‘The Story of Doctor Dolittle’ Remains a Delightful Tale of Adventure

Embarking on a journey with a loyal crew of lovable creatures, the classic childhood tale of The Story of Doctor Dolittle by Hugh Lofting details a former physician turned veterinarian’s endeavors with the animal kingdom. Lovable animal companions are brought to life, and through wonderful characterizations, remain no longer an element of imagination, and instead, pull young and old readers alike on an exciting adventure through the beauty of the African rainforest.

The plot centers around Dr. John Dolittle, a respected, delightfully eccentric doctor with a deep affection for all wildlife, a passion that’s unfortunately led patients and townspeople to steer clear of his residence, driving him to near bankruptcy. Faced with tremendous financial misfortune, Dolittle confides in his pet parrot Polynesia, who begins encouraging the pursuit of veterinary practice, teaching him the secrets of the language of the community he’s grown so fond of. Notified of dire emergency, he receives a call from the monkey population, who have been devastated by a terrible disease and are in need of his aid.

Borrowing a ship, he sets off with his crew of animals, Jip the dog, Dab-Dab the duck, Gub-Gub the pig, Too-Too the owl, Chee-Chee the monkey, Polynesia the parrot, plus a crocodile and a stowaway mouse, all given personalities of their own. The quest storyline was beautifully written with sudden twists and details that kept me on my toes every time. As a splendid protagonist, Dr. Dolittle’s support and caring relationships with each and every animal made for a heartwarming experience, igniting the inner bright, imaginative essence in my childhood.

Lofting’s stories first appeared in letters back to his home to his children as a soldier serving in World War I. This book takes readers on an exciting journey through the jungles of Africa right from the comfort of their own homes. Original illustrations hand-drawn from the author are a lovely visual into the world he has crafted. Highlighting the beauty of eccentricity in light of a world that values conformity, the character’s relentless championing of animal’s rights despite economic hardship is a striking message that has stood the test of time, stressing the importance of recognizing and stopping injustice.

The Story of Doctor Dolittle emerges triumphant with a touching, vivid tale of adventure, long celebrated in the hearts of children and literature. Delightfully imaginative short stories will appeal to every audience, and remains a classic read still to this day.