Alexandria Villaseñor and Her Fight Against Climate Change 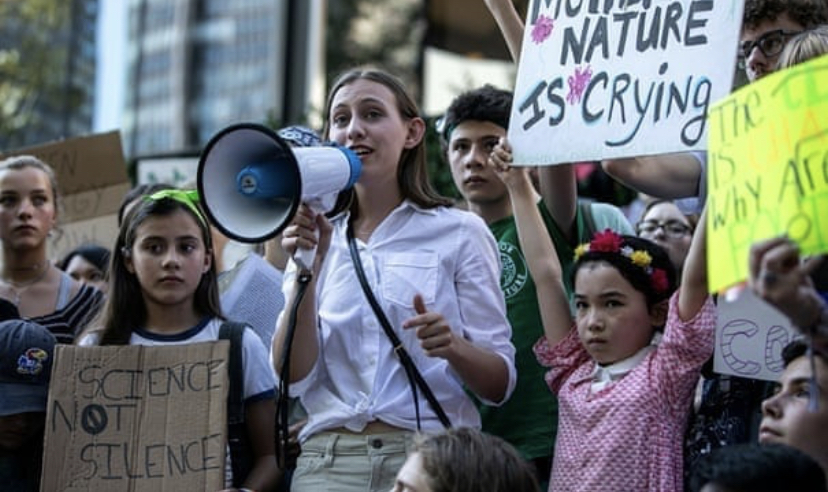 Alexandria Villaseñor (center) talks to the crowd at a climate strike. Since late 2018, she has become one of the principal faces of the movement in the US. Photo courtesy of @alexandriav2005

As the climate crisis morphed from the protests of a few determined teens to thousands of young and spirited protesters on the streets in a massive movement, the intentions for a brighter and more sustainable future became the rallying cry of young teens on a mission to activate change. Activists like 14-year-old Alexandria Villaseñor have channeled their voices into this ever-strengthening movement, participating in climate strikes and setting off an expansive group of youth ready to persuade local and the federal US government to systematically reform the ways the changing climate is addressed.

Beginning her journey by protesting outside of the United Nations (UN) in New York back in 2018, Villaseñor has grown support for the movement in the US after it received national attention in Europe. The resilient young teen has become a crucial voice against climate deniers and those Villaseñor and other activists see as ineffective, ignorant policymakers. Amassing thousands of followers on social media platforms such as Instagram and Twitter since her first strikes, she has conveyed her passion of educating individuals on the changing climate and how to combat opposition to more sustainable climate legislation by co-founding US Youth Climate Strike and creating the organization Earth Uprising. The intentions of Earth Uprising are to help young people find the multifaceted ways they can contribute to the climate change movement. Even as the global community is warped into a scary and dizzying situation due to the COVID-19 crisis, Villaseñor is seeking new and innovative methods of keeping the fervor of the climate protests alive.

“I think one important thing that’s happening during this past time is we are doing a lot of reflection, so what have we achieved in this past year and what made that impactful? So we are starting to talk about what makes a direct action, is it the people, is it the presence?” Villaseñor said. “Someone had an idea to break the Guinness World Record for largest Zoom call during this time because that would technically count as a direct action.”

Earth Uprising has a group of teens ready to fight for climate justice, which make up the Global Youth Council. Villaseñor connects with other impassioned teens especially regarding her organization and the message they are striving to convey.

“So trying to use social media as a tool for us is what we are trying to do, and specifically my organization Earth Uprising [is] planning a social media campaign that will focus on spotlighting different countries and having this video web-series that will hopefully be launching on the 15th this month,” Villaseñor said. We plan to spotlight different countries in a video series and it is to raise awareness [about the movement] and also to raise awareness of what is happening in other countries during the coronavirus because sometimes we get in this little bubble and it’s hard to hear what is happening in other places.”

After the coronavirus pandemic ceases, there will be much uncertainty about whether things will return to normal. Villaseñor addresses that the movement will be different and the idea of protesting in large groups as before might be uncomfortable for some. As time goes on, Villaseñor and other activists seek alternative methods of informing and protesting, including more work on Earth Uprising which was founded last April around Earth Day.

“[Earth Day] was kind of a big day for us anyway and I ended up founding [Earth Uprising] when I started to see how a lot of young people weren’t going to the climate strikes because they didn’t see why it was important. There were actually strikes where these young people were being interviewed by media and they didn’t actually know why they were there. I’d walk by and this kid was giving an interview and he was like ‘my friend said we should go’ and I was like ‘Wait, hi, let’s not please’,” Villaseñor said.  “[It’s about] starting to educate people so they could get more involved and out of our population we actually don’t have nearly enough people involved in protesting and so it was to raise that bar and especially internationally.”

“Education is very important internationally so I wanted to start focusing on that aspect but also start to work more in the solutions area when it comes to working with the UN, UNICEF, all of these different groups and focusing on having young people be the solution makers themselves,” Villaseñor said. “Having more people in places like the United Nations Climate Change Conference (COP) and the UN Climate Summit, that was the main mission.”

One main mission for US Youth Climate Strike, another organization Villaseñor works with, is seeking alternative transportation methods aside from cars. Living in New York, using the metro could take her to the strike’s destination more efficiently and more sustainably than by car. However, Villaseñor knows most cities do not have a widely used metro system and that can be difficult for people in cities like LA where getting from place to place is strenuous. She is seeking to encourage government legislation to be passed to create more widespread metro systems across the country.

“One thing for Earth Uprising is so many young people want to start up these new groups and they have ideas for campaigns or organizations so Earth Uprising, we have a #MyUprising campaign where we have teenagers and if they have an idea, we give them the platform and the resources and the financial support to have their campaign become an actual campaign,” Villaseñor said. “That was the idea to give young people a platform. [To] educate, organize and take direct action are kind of our three main pillars.”

Villaseñor has kept her persistent goal of taking part in every Fridays for Future since December of 2018 in rain, shine or the extreme weather of the Polar Vortex in New York. She was lucky enough to have the support of her school when she began to miss class on a weekly basis. When she moved to New York from California, she had to adjust to less lenient school administration when it came to absences.

“Striking on Friday is definitely an act of privilege. One thing in the United States is if you have the privilege to strike, of course do it,” Villaseñor said. “However, there is a need to find other ways to take action because in this past year we haven’t seen as much legislation as we need to from the climate strikes so we have to find different ways to take action. That’s why I’m focusing a lot on education, so [in] Earth Uprising what we are doing is focusing on a lot of school groups and clubs, kind of modernizing the idea of clubs.

The expansion of the movement is a critical goal of Earth Uprising. The Global Youth Council is comprised of ambassadors from many different countries. They all work to inspire change in their home countries as well as globally.

“It can be a school club or a community club, it can be digital as well. In this [way] they teach climate education, the basic climate science- but they also make it interactive. So doing challenges around climate and art, finding ways to build a sense of friendship. If you have a city council and there is legislation you want, just go there and lobby, set up meetings with city council members. There are toolkits that we have that we can also send that we are working on.”

Whether individuals have taken part in the climate movement or plan on beginning now, it makes a difference. When 315,000 people took part in a protest in New York at the United Nations Youth Climate Summit, this highlighted a great willingness for social change. Despite the fact that she views governmental policies remaining steadfastly anti-climate and reliant on detrimental fossil fuels and billion dollar corporations, for Villaseñor the fact that teens attended the UN General Assembly was a historic and monumental step.

“Specifically here in the United States there are so many different Youth Climate organizations and everyone has a different theory of change,” Villaseñor said. “I think with all of them we make up this climate ecosystem, so [in] Earth Uprising we focus on education and action. And then there are organizations that focus on the political system, non-violent direct action as well as systems of oppression so [like] This is Zero Hour.”

In the Central Texas area there is a relatively small but growing number of protesters who attend strikes at City Hall and are part of Earth Uprising, specifically in the Dallas and Midland areas.

“And so it’s really just [how] you feel like you can make your voice heard and what’s most important to you personally because action can be taken in so many different ways; people can go on a strike, they can go lobby their local politicians, or even their city council. They can talk to their friends and community about it so I think that really the first step for people to do is find their climate story and what makes them passionate and then they find what action resonates with them.”

For activists like Villaseñor, change is necessary to counteract the worsening effects of climate change. It starts with education and conversing with others. It is followed by a devotion to seek results. Even as COVID-19 seems like the most persistent problem clouding our minds, Villaseñor and other teen activists are doing their best to make sure climate change is not forgotten.