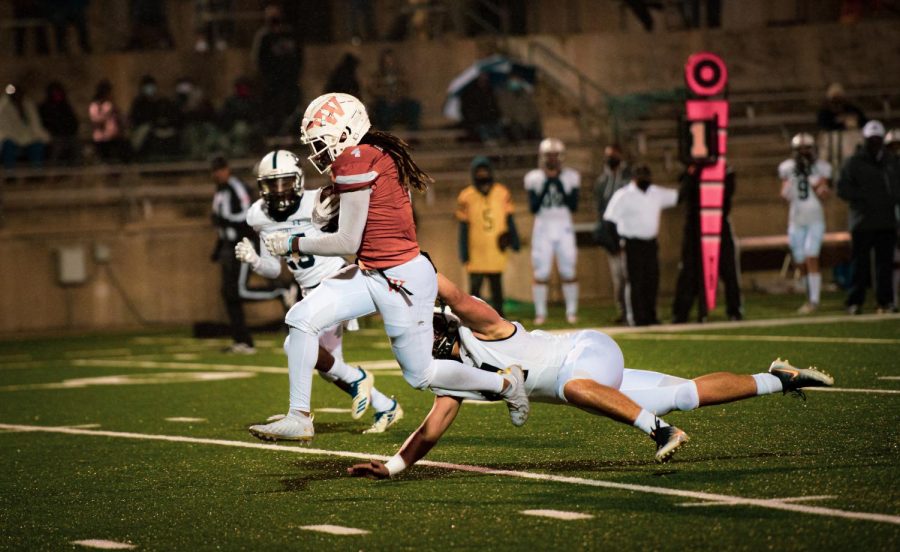 While a defensive player clings on to his back, Nate Anderson ’21 runs towards the end zone. The play resulted in Warrior first touchdown making the score 7-0.

Continuing the season after a two-week quarantine period, the varsity football team took on the Stony Point Tigers on Monday, Oct. 26. The Warriors started off strong with 28 points in the first half, and carried their positive momentum for the rest of the game. It was a cold and misty night, but the Warriors were hot throughout the game and pummeled the Tigers 42-15.

“It was good to get back out there with my brothers,” CJ Hill ‘21 said. “We have put in so much work since early August and that two-week period showed us that we never know when this might stop.”

After quarantining for two weeks due to COVID-19, the Warriors were ready to get back on track and take home another win. The Warriors started off on defense and played well, not letting the Tigers score. The Warriors inched their way over to the 26-yard line on the Tigers’ side, and later, Anderson received the ball and powered through with a five-yard scamper to score the first touchdown of the game. The extra point after the touchdown was scored as well, and the Warriors were up 7-0.

In the first three minutes of the game, Anderson scored another touchdown at the three-yard line, connecting the pass from RJ Martinez ’21; again with the extra point. Later in the quarter, wide receiver Robbie Jeng ‘21 scored another touchdown from a 19-yard pass from Martinez, with the extra point scored as well. After a few setbacks, Martinez managed to break a tackle and gain ten yards. In the last two minutes of the second quarter, Martinez made a 54-yard pass to wide receiver Zach Pryor ‘22, who was open at the end of the field to score yet another touchdown, once again with an extra point. The Warriors finished the first half of the game leading by a score of 28-0.

“It is really great to be making an impact on the team,” Pryor said. “But even more than that it is great seeing the community on the team and being able to see [Julian DeBerry ‘21 and Tomas Henry ‘21] running down the field to celebrate with me.”

With just under nine minutes left in the game, the Warriors scored yet another touchdown and extra point with a pass from Martinez to Jeng to complete the scoring for the night. The Warriors kept their defense strong for the remainder of the game, making sure the Tigers didn’t score any more touchdowns. The final score at the end of the night was 42-15.

“It was a great way to cap off the game with that and I was so proud of our team, we worked hard to prepare and it was awesome to see it pay off that Monday night, great way to start district play,” Jeng said.

The Warriors travel to Gupton Stadium to battle the Vista Ridge Rangers on Saturday, Oct. 31.