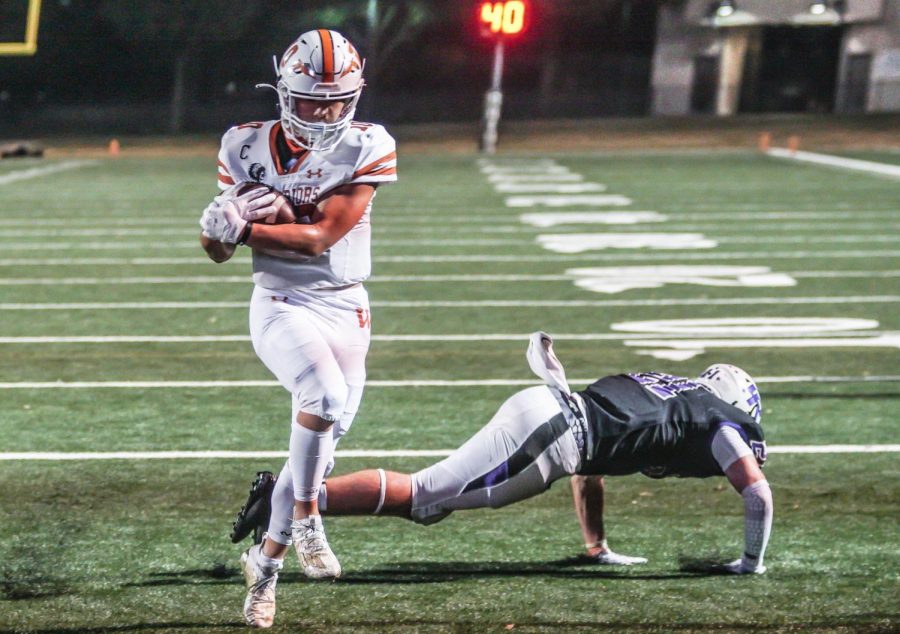 Making his second touchdown of the night, Robbie Jeng ’21 escapes the Raiders defenders in the end zone. This was the last touchdown the Warriors scored in the game.

Carrying on in their season, the varsity football team went up against the Cedar Ridge Raiders for an intense match on Friday, Nov. 13. The Warriors started out well, leading by 13 points, but the Raiders soon caught up with them and started gaining points quickly. The contest finished with the Raiders winning 63-20.

In the first three minutes of the game, Zach Pryor ‘22 and Nate Anderson ‘21 both helped the Warriors gain 35 yards, with Anderson then scoring the opening touchdown from the four-yard line. The Warriors went for the two-point conversion but failed to convert. A couple of minutes later, at the nine-yard line, RJ Martinez ‘21 passed to Jeng in the endzone for another touchdown. The Raiders then picked up a touchdown of their own, but with another touchdown pass from Martinez to Jeng in the last minute, the first quarter ended 20-7.

“It was incredible to start the game off by catching two touchdowns in the first quarter and scoring our first three drives but unfortunately we didn’t continue to execute which led us to losing,” Jeng said.

The Raiders started catching up with the Warriors after their deficit in the first quarter, picking up three touchdowns in the second quarter. The Warriors kept the Raiders on their toes, putting up many attempts and efforts to block and defend themselves, but by the end of the first half of the game, they were down 28-20.

“I felt like I could’ve done better but we all work together from making the other team score and one guy can’t do it by himself, we work as a team and do our jobs to stop other teams,” Darion Barnes ‘22 said.

“We hope to have a good week of practice and bounce back for our homecoming game against McNeil,” Jeng said.