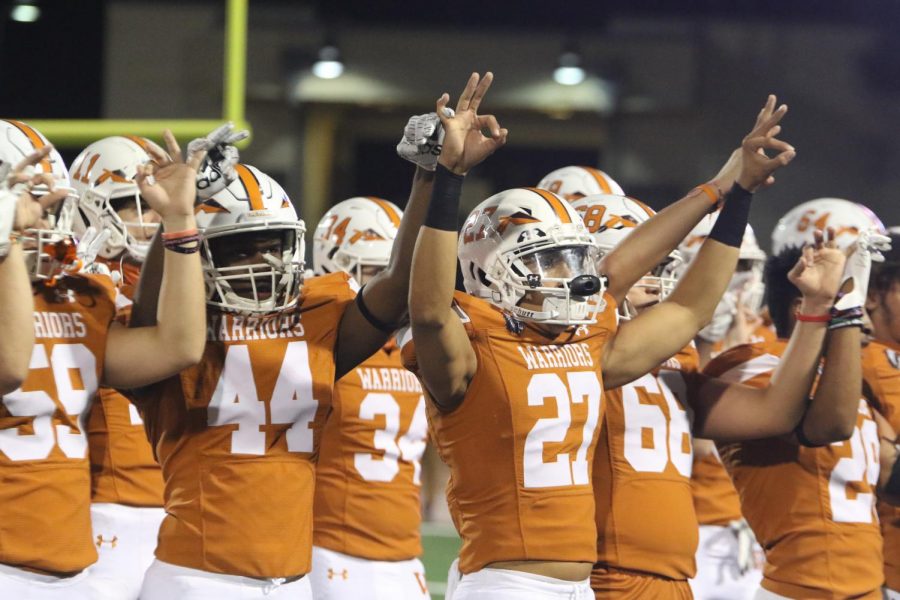 Linking pinkies, the Warriors all stand together as the band plays the alma mater. Westwood ended up winning the game.

The varsity football team headed into their Homecoming clash against the McNeil Mavericks hoping to stop their recent skid. Having lost their last three games, the Warriors were amped up and rearing to go on Friday, Nov. 20. Propelled by quarterback RJ Martinez ‘21’s four touchdowns and running back Nate Anderson ‘21’s 126 rushing yards, the Warriors were able to overcome a slow start and earn a 42-28 victory over their rivals. Wide receiver Robbie Jeng ‘21 paced the Warriors in receiving with nine catches for 118 yards and a score.

“We all came together and fought back as a team,” Martinez said.

The Warriors got out to a slow start, punting on their first two drives and falling behind early after allowing an 89-yard touchdown run. However, Martinez was able to scamper for a 12-yard touchdown run to even the score at 7-7, evading two Maverick defenders on the way to the endzone. After that, both teams traded scores so that the game was now 14-14, with the Warriors scoring on another Martinez run. With great field position, the Warrior offense scored on the final drive of the first half, taking just five plays to go 48 yards to take a 21-14 lead into halftime; Martinez connected with Zach Pryor ‘22 for a 17-yard dart to put the Warriors ahead heading into the locker room.

“The adjustments we made were to simply execute better,” Martinez said. “We had a great game plan coming into the game and we were stopping ourselves from being successful, so we made minor adjustments because our game plan was good going into the game, so all we needed to do was execute.”

At halftime, the homecoming royalty was announced, with Hart Black ‘21 and Sohan Agnihotri ‘21 earning the honors.

In the second half, the Warriors began to put their stamp on the game, stifling the Maverick offense after a McNeil touchdown that evened the score. The Warriors scored 21 unanswered points, while the defense prevented the visiting Mavericks from doing anything of note on offense. Anderson’s lone touchdown from 14 yards out allowed the Warriors to reclaim the lead, and the Warriors never looked back, as they would lead for the remainder of the contest. After Anderson’s touchdown, wide receiver Julian DeBerry ‘21 recovered the ensuing onside kick to further swing momentum in favor of the home team, and Martinez found Jeng on the next offensive series for a six-yard touchdown pass to take a 35-21 lead.

In the fourth quarter, DeBerry put the game out of reach with a two-yard rushing touchdown with less than five minutes left to cap off a dominant second half for the Warriors. A garbage-time touchdown for McNeil did little to alter the result, and the Warriors were able to bleed the clock and secure a much-needed victory.

“I wouldn’t say there was any pressure on us,” DeBerry said. “We just had to go out there and have fun and do our jobs, but it felt really good for the team to get that win in front of the home crowd.”

The Warriors improve to 3-4 on the season and will square off against Hutto on Wednesday, Nov. 25.