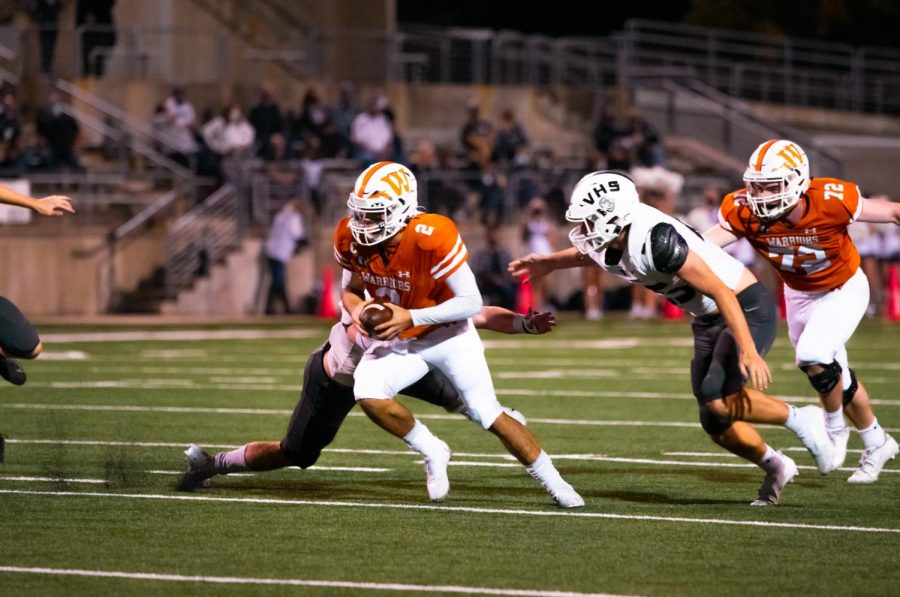 With two defensive players right behind, quarterback RJ Martinez ’21 attempts to slip the grip of a defender in last week’s game against Vandegrift. Despite Martinez’s attempt, he would get taken down moments later.

On a brisk evening on Thursday, Nov. 5, the varsity football team played against their rivals, the Vandegrift Vipers. Throughout the game the Warriors traveled up and down the field and gained yardage, but they were defeated by the Vipers 38-7.

“The team was obviously not super excited with the results, we realized that was not the performance we should have put up,” Zach Pryor ‘22 said. “But the fact of the matter is we have to get back to playing this week and focus on the road up ahead.”

The Warriors started off on defense, and switched off possession of the ball with the Vipers for the first six minutes. The Vipers scored a touchdown and extra point and RJ Martinez ‘21 made a 38-yard run in an effort to score some points of their own. However, with less than a minute left in the first quarter, the Vipers scored another touchdown.

“The team and I felt very confident going into that game. I knew the outcome wasn’t what we intended for it to be but our mindset was to go out there and play hard and with confidence,” Martinez said.

With efforts to come back, the Warriors defended their side well starting the second quarter, forcing a turnover on downs and gaining yardage. Unfortunately the Vipers scored another touchdown and field goal in the last two minutes of the second quarter, ending the first half of the game 24-0. Throughout the third quarter, the Warriors made strong attempts to score, and gained yards very often. In the last minute of the quarter, the Vipers scored another touchdown despite the Warriors’ defensive efforts.

In the last quarter of the game, the Vipers scored yet another touchdown, but the Warriors continued to fight. Finally, in the last two minutes of the game, Martinez scored an eight-yard touchdown with an extra point to end the match.

The Warriors face the Cedar Ridge Raiders for their next game on Friday, Nov. 13.