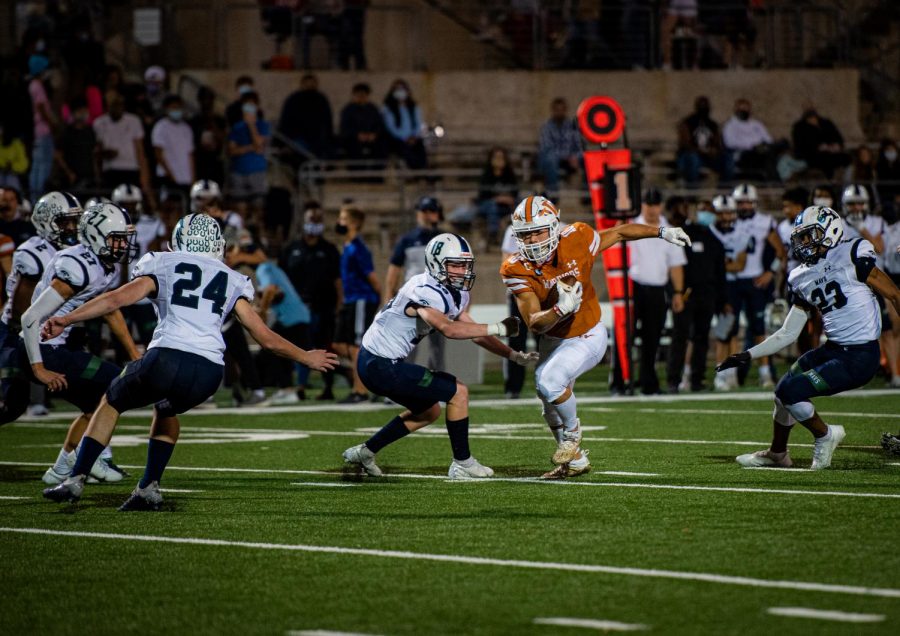 Surrounded by McNeil defenders, wide receiver Robbie Jeng ’21 turns upfield after picking up a first down. Despite Jeng’s record-breaking performance against Hutto the following week, the Warriors fell to the visiting Hippos, eliminating them from playoff contention.

On a rare daytime showdown, the varsity football team got set to square off with the Hutto Hippos in a district showdown on Wednesday, Nov. 25. A must-win game for both sides, the victor of this contest would live an extra day in the District 25-6A playoff picture; both sides sat at 3-4 on the year, and a loss meant elimination from the postseason. Unfortunately, despite a record day from wide receiver Robbie Jeng ‘21 and a dazzling passing performance from RJ Martinez ‘21, the Warriors saw their postseason hopes fade away, falling to the Hippos 38-31.

Jeng broke the school record for most receiving yards in the match, totaling a whopping 254 yards on 13 catches. Martinez had over 400 total yards of offense, and running back Nate Anderson ‘21 chipped in 97 rushing yards on 19 carries. Chase Griffin ‘23 also contributed four catches for 90 yards.

“I was honestly surprised [about the record being broken] because I had no idea until my coach texted me later that night, but it was an incredible feeling and I for sure wouldn’t [have been] able to do it without the rest of my team,” Jeng said.

Both teams failed to score in the first frame of the match, but early in the second quarter, Hutto was able to strike first with a 22-yard touchdown run. The Warrior offense countered this run with a 59-yard dart from Martinez to Jeng to even the score. Hutto soon responded, though, and was able to get a touchdown through the air this time from 14 yards out. However, the Hippos failed to make the extra point, leaving the score at 13-7 in favor of the visitors. The Warriors were able to deal the final blow of the half with Martinez’s second touchdown pass of the game, a 33-yard strike to Zach Pryor ‘22, and the Warriors took a 14-13 advantage into the locker room.

After halftime, though, the Hippo offense was able to easily move the ball up and down the field. The Hippos had a pair of long scoring passes and chipped in a field goal, while the Warriors could only muster a Matthew Jack ‘22 field goal to answer. The second-half offensive explosion for the visitors put them up by two scores early in the fourth quarter, as the Warriors found themselves trailing 31-17 in the final frame.

Despite the two-touchdown deficit, the Warriors weren’t done yet as Anderson was able to find the endzone to make it a one-score game. With time ticking, the Warrior defense needed to get a stop to set up the offense once again, but Hutto delivered a crippling blow to the Warriors’ playoff hopes with a 15-yard touchdown run. With the score now 38-24, the game, and the Warriors’ postseason chances, appeared to be coming to an end.

The Warriors would conclude their season against their rivals, the Round Rock Dragons, on Friday, Dec. 4.