Defying Democracy: Rioters at the Capitol Promoted Hate in Guise of Patriotism 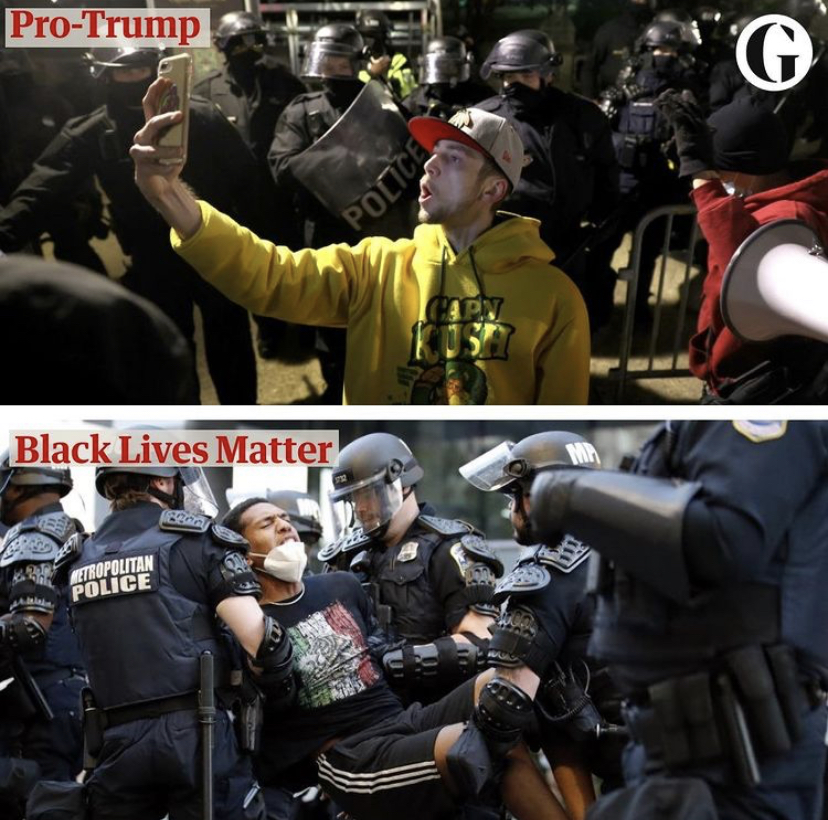 The startling difference in police conduct against Black Lives Matter protestors and the rioters that illegally entered the Capitol highlights a systemic racism issue in our society and unsettles us, as we view our nation as the land of justice. Photo courtesy of @guardian

It was quiet. The day was calm like many others and I went about my work, absorbed in the day to day rituals that I did with such frequency that I seemed to function in relative autopilot. This kind of idyllic monotony was shattered in an instant. I suddenly wished for the simple quiet again. I ran over to the TV screen my parents were watching with captivated eyes, as rioters swarmed in droves into the Capitol. The TV reports detailed that congressmen were shuffled out of the Capitol, some hiding for fear of the mob that scaled walls, barged in, and turned windows into sheer fragments of disintegrated glass.

The Capitol is an emblem of our democracy, the tangible form of the two century old American experiment. This sacred pillar of our democracy represents the continual cycle of triumphs and hardships that we as a nation have undergone in hopes of a brighter future, free from the insidious tentacles of hatred and the poisoned fangs of inequality.

I among many others watched the screen that day, seeing the Capitol pillaged, swarms of people entering the halls, as representatives disbanded from their democratic duty, being escorted undercover to a safe location with fearful expressions plastered on their faces. Rioters break in waving Confederate flags, the terrifying symbol that truly stands for hate, violence, and un-Americanism.

A man sits in Nancy Pelosi’s chair and laughs as his fellow Trump supporters scream the word, “traitor,” aiming their vigorous screams at congresspeople doing their duty. They call the election of Joe Biden unlawful as they illegally enter the Capitol, a place you’d never imagine to be taken over in a fell swoop, with such little resistance. Large crowds of people enter as the Capitol is in session to determine the legitimacy of voter fraud claims and the accuracy of the election. Police officers do not halt this intrusion, in a scene that looks eerily similar to coups and blockbuster movies where chaos in an apocalyptic world occurs.

Police officers do not halt this intrusion, in a scene that looks eerily similar to coups and blockbuster movies where chaos in an apocalyptic world occurs.”

In films you can take a piece of candy or popcorn and be rid of anxiety, knowing it is a fictitious reality and that in two hours time, the sanctity of government and peace will be restored. All will be well because everything that is just and good in the world will and must prevail. But take off the filter of film. This is real life. It is not some fantasy where the villains are thwarted by simply an inspirational speech. It takes hours before action is taken and a curfew is implemented.

I reflect on only a few months ago as Black Lives Matter protesters engaged in peaceful protest outside of the White House. In a horrendous moment, police officers marched with a brutality synonymous with the likes utilized in third world, war stricken countries. In a terrifying second, tear gas emerged, dousing the peaceful crowd in toxins as screams erupted.

When I first saw videos, tears glazed my face. I was outraged, overcome by anger. But mostly I was saddened, pained at the events unfolding before my eyes. It was a scene that said to me, “American democracy is destined for the selected few.” A country that I call my home, that claims it is the optimal depiction of freedom- of justice, law, and order- tear gassed civilians exhibiting the First Amendment to cry that their rights as humans, as Americans, were not being fulfilled. That their friends, their family members were being killed in their homes and in the streets. To plea for decency. To plea for humanity. To seek the basic right of being able to live in peace. Some called the Black Lives Matter protests out for blaming the police and saying that without the police force as it exists today, chaos would ensue. Much of those same people later created calamity on the floor of the capitol, attacking and pushing police officers. There’s simply no congruency to their message. It rather seems that their intent is to stoke a vicious hostility, to nurse and nurture animosity, and to deny reality.

I’m a proud advocate of the First Amendment. Journalism is, by exemplification, the written form of expression that unearths and condemns the darkness present in our world while capturing the glimmering light that is in equal measures embedded into our human civilization. Journalism does this through truth, accuracy, and ethics. It is the greatest example of democracy in its authentic, unsaturated form. This was not patriotism. This was not a utilization of the First Amendment under the notion of democracy. Freedom to use the First Amendment is only constitutionally sound when it does not incite fear and violence. They can not challenge our institutions with such actions and package it with wrapping paper and a big bow to pass it off as caring about their nation. This isn’t caring about America- this is about stoking hatred and rejecting a peaceful and rightful transfer of power.

This isn’t caring about America- this is about stoking hatred and rejecting a peaceful and rightful transfer of power.”

This is about making sure that the nation never prospers, but remains grounded in archaic notions of liberty. Those who love their country but know that it still needs constant growth to truly achieve, “liberty for all,” understand that peaceful acts can resonate for long to come. Those rioters are among those that claim they have an ardent passion for their nation. And yet they undermine the democratic process and the work that elected congress representatives were entrusted to do. “Weren’t you the nation that offered prosperity, peace, and democracy?” “Didn’t your installation serve as a counteraction to anarchy, old rules of sovereignty, and injustice?” These are legitimate questions that will be asked of the US by other nations, both our allies and our adversaries.

But our democracy can endure. The events that transpired must bring shame and burdening sadness to our hearts. But it also must instill the urge to act. To make sure that a president that thrives on falsities, corruption, and pure disregard of others and the beautiful diversity of this nation of ours will never again muddy the title of Commander in Chief. To instate a precedent where we are not a divided, torn American but one that curates love, true freedom, and justice for all, a glimmering, glorious notion that our nation has long strived for, but is still on the long and arduous path of fully embracing. This incident enables us to call out the issues that are present in our nation and work to remedy them. It is not the job of one, not solely the job of the government, or one leader. It is an attitude that must be incorporated into all of our lives, if any change is to happen. Because democracy is the power of the people, we must work together to ensure that such disparities of reaction by government members and police will no longer exist. They have skewed to act with civility towards violent protesters rampaging the capitol, yelling that their freedom is being taken away because the results of a fair election did not satisfy their desires, but brutalize the peaceful protesters who are genuinely fighting for their lives at Black Lives Matter protests.

We require as a society the return of humanity into government and the rejection of harmful lies and incivility. It is only if we denounce the agents of evil and malice and evaluate what we can do to remedy the division that tears us apart then we will prosper.