Reckoning With Authenticity: Social Media as a Platform for Student Multidimensionality

With the onset of panicked warnings to “stay home, stay six feet away, stay safe” and a year and a half of forgetting we existed beyond the length of our headshots on online meets, it seems inevitable that most of us retreated online, living vicariously through brightly colored likes, strange trends, and exaggerated comments littered with a myriad of emojis. From the vandalism in schools across the country in fall 2021 to the surge in the communication of school victories and clubs on Instagram, the effects of social media in the last few years have been unparalleled. Monthly explosions and controversies concerning the future of our “chaotic” generation of young socialites and the control of social media over “anxiety and depression” continue to date.

But where does Westwood fit into the grand scheme of this discussion? Has the culture at our school mitigated the reported “negativity” emanating from social media? Have we as a collective followed the trends of increased “teen addiction” as a result of limited interaction during the pandemic? Westwood Student Press conducted a survey asking questions concerning student daily social media usage and the lingering effects to find out. 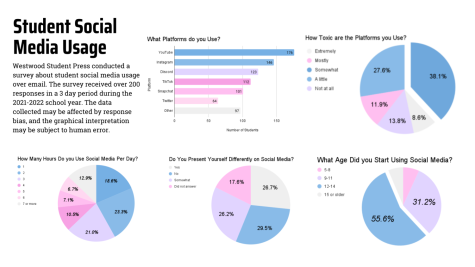 What defines toxicity? Is it the constant desire to conform based on the pressures of social media? Is it only the feeling of being trapped within the need to consume the fast pleasures of the internet? Or is it more than that? Is it those lasting effects funneling into a dark hole of deeper issues like anxiety and depression? From the simplest definition to the most complex one, Westwood students have interpreted the negative energy from social media in all facets of the word.

With the programmed ease of liking posts, sending amusing comments, and pressing on the various brightly colored reactions, instantaneous positive feedback loops arise from social media usage, allowing for satisfaction in an otherwise grim environment. Each action taken induces a need for even more dopamine. As a result, several students have named “procrastination” as one of the lingering effects of their online usage.

“I feel like social media definitely drains your time,” Philip Wong ’22 said. “Especially how they just keep giving you more content that is targeted to interest you. [It] makes you focus [and] makes you unable to look away.”

However, with online school and few personal interactions, social media may have amplified the already difficult addiction tenfold. Especially during the pandemic, hours spent craving easy fulfillment had been creeping upwards around Westwood, in line with the constant gratification of social media apps.

“Sometimes I think I probably spent like 14 hours a day on my phone,” Wong said. “That was kind of unhealthy. But like, I couldn’t really do anything else.”

During the time supposedly “wasted” on social media, many students have mentioned the numerous posts and stories circulating that feature seemingly perfect individuals. While these may seem harmless, they have the potential to generate a well of feelings of inadequacy and lower self-esteem. According to Facebook’s research into its photo-sharing app, Instagram, 32 percent of teenage girls who “felt bad about their bodies” said that Instagram made the issue worse. Westwood students are no exception to the trend.

“I feel like [social media] has affected my way of thinking,” an anonymous sophomore said. “It’s just a lot of comparing. Like before social media, I didn’t even think about how I really looked or [my] side profile or how long [my] lashes are, and now I pay more attention to that. Like back then, I never wore any mascara or makeup or anything, but that changed because of how I see other people.”

Beyond the compulsion to follow trends and rise in popularity through aesthetic value of Instagram posts, a few students have mentioned the deeper issues of the addictive escape of social media. The pandemic resulted in skyrocketing rates of depression and mental health problems, according to a study conducted by the University of Calgary.

“I used to post often and I would try so hard to come across in a certain way,” an anonymous student said. “My screen time was upwards of 17 hours and my mental health was at an all time low, like rock bottom. I reached a breaking point and ended up deleting all personal accounts.”

Presented with a mass of information, the individuality of perspective synthesized cannot find refuge forever within the forums in which they may take place. Especially true under the algorithms that allow rampant toxicity to thrive, the gradual development of addictive behavior within the fabric of such platforms is more or less commonplace. This notion of curated digital identity also facilitates self-reflection that establishes a distance necessary to maintain balance in our chosen reality.

“There’s different ranges of changing yourself to be more likable,” Anuva Fulzele ‘24 said. “I can change myself for other people, but it was [also] insightful for me. I [realized] that my friends in real life, the reason I was friends with them in the first place was because of my character, and who I was in the beginning. If I change so much, am I the same person that my friends would want to be friends with?”

Developing this astute familiarity with the various multimedia that encompasses such diverse roles in daily life firstly takes the form of learning to interact with internet discourse, which perpetuates a sense of belonging offered by communities of various common interests and the subsequent visibility obtained when connections, perceptive by nature, change with the natural permeability of current trends.

“Social media revolves around your interests, Fulzele said. “Those interests, in themselves, continue to evolve. There will always be something new to interest you in that field.”

Ultimately, the constant human endeavor to be acknowledged heightens the significance of what it means to find inherent camaraderie in interactions facilitated across every sphere of existence.”

To stake the claim for immersivity and a welcome fluidity in the expanding digital tools for social interaction, it is critical to embrace the rapid ebb and flow of thought. Ultimately, the constant human endeavor to be acknowledged heightens the significance of what it means to find inherent camaraderie in interactions facilitated across every sphere of existence.

“You can’t be on social media forever,” Fulzele said. “Your presence can’t be there forever, and you won’t thrive off that forever because it changes so quickly. That’s also what’s good; people get the chance to experience the internet, make their mark, [and] find community, but over time, these things that people are interested in change.”

For every phone that illuminates the faces of students engaged in a multitude of roles and responsibilities throughout the course of their academic careers, a distinct portraiture of the individual stories that are tethered to mediums in which information is both presented and consumed have found heightened meaning in the changing habits of consumption propelled by the pandemic.

At the forefront of this discourse is social media, a powerful tool that for many, is the culmination of distinct perspectives to curate a worldview strengthened by the inherent reciprocity of communication and its subsequent properties of visibility and ever-continuous participation, amplifying connection beyond interactions of digital one-dimensionality. Operating at the intersection of culture and social engagement, these differing and nuanced definitions shape and magnify the notion of human interconnectivity with immeasurable impact. 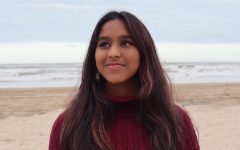 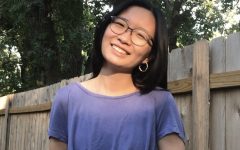 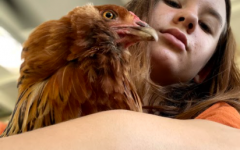