There exists a magnificent synecdoche between poetry and journalism, two writing forms that seem to deeply contrast. In exploration of these powerful forms, I understand their conjunction and how they vitally garner strength from one another. Graphic by Hadley Norris

Pairing poetry and journalism jargon is something that may seem contradictory. The methodical editing and the concise style of journalism may seem at odds with the bountiful flexibility or chosen inflexibility of poetry, but the two are friend rather than foe. Journalism enabled me to view my poetry with a concise focus and to ultimately form narratives with structure and style. It’s funny to think that the inverted pyramid and AP style were helpful in how I built my poems, and even, the methods of persuasion I also garnered from journalism.

The methodical editing and the concise style of journalism may seem at odds with the bountiful flexibility or chosen inflexibility of poetry, but the two are friend rather than foe.”

Now, I am poised to receive a gold medal from the Scholastic Art and Writing awards for my poem ‘Portrait of a Persian American Girl.’ The poem details my trajectory navigating my identity and embracing how Persian emblems can be mirrored on my physical attributes. It also reads like a letter of acceptance and adoration of my heritage, and how I reframe and rearticulate stories I heard about revolutionary Iran from my family.

Simultaneously, it immortalizes the bravery of my grandmother, who recently passed away from cancer. She passed away after the poem had already received regional recognition, but it acts as remembrance of her and her fortitude in every facet of her life. I speak about how having the freedom of speech and expression is terribly precious, and how we must protect these ideas and safeguard our democracy because these things are not promised.

The poem also tells of how I use the abilities I have as a student journalist to speak up and how I’ve learned how valuable it is to possess the freedom of speech. It was through crafting poetry that I realized journalism’s vital role in allowing me to write so freely in the poetic form. Though poetry is artistically driven, it was in the journalistic drive to exemplify the truth that I was able to express myself poetically. This connection is one that has been wielded by journalists; the pairing of these mediums to speak of social issues through compelling form is one that is both precious and powerful.

One of my fellow poets in the Austin Youth Poet Cohort focuses their recent works on the war in Ukraine and pairs facts with narrative. To capture the humanity facing tumult in the presence of inequity, injustice, and immorality, bridging poetry and journalism takes the strengths of both writing forms, resulting in a masterfully persuasive storytelling technique.

My inevitable and intrinsic relationship with poetry has just begun. The lilting lines of my poetry can be seen in parallel with my feature pieces. There is a clear trajectory to both. Without first being a journalist, I don’t think I could have so swiftly carved my place as a poet.

With both, there is a dedication to truth. And while poetry may be more freeing, I can say I cherish the curiosity journalism implores. It urges you to venture and research, and thus, that is the method that I, unconsciously, embedded within my poetry. To form my narratives, I added detail, and had to identify and analyze both literary and thematic connections. That is not far from what journalism urges. It may be more methodical, but behind most every article is one person or multiple people’s narratives. That is what drew me to feature pieces specifically. I would collect the facts, but simultaneously understand the stories of people behind movements and ideas. It would reinforce and bolster what they spoke of, to be in direct dialogue with them. Instead of solely seeking facts from other news pieces, I would converse with those who were directly impacted or making a direct impact in a myriad of issues ranging from climate change to combating prejudice.

As I reach the end of my role as Editor-in-Chief of this newspaper, I feel nostalgic for the roots I established and fostered in the newsroom. I learned the art of editing, and that gave me a sense of precision when it came to handpicking words to craft my poems. I learned the weight of each word. By surrendering my shell and taking action as a journalist, some of my fear slipped away. I became less fearful to be candid in my poetry. It didn’t enable me to become brash, but rather to place value in what I was saying. Less inhibited, I felt unrestricted to further grow my creative style.

The two writing forms, one often categorized as cold and staunchly meticulous, and the other for being too emotionally driven, balanced my writing style. The two have merits of being both informative and persuasive. I am grateful for the effect of them both, and rely on the skills they helped me acquire. Journalism may seem solely straightforward on the surface, but it allows you to delve into the complexity of humanity. This is where it compares with poetry. There is splendor in how they seek to speak of sorrow and strife, happiness and hope. I am proud to be a journalist and poet, and I hope to color in the overlap the two create for other poets and student journalists. 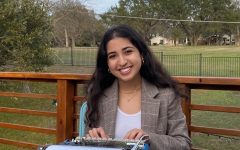