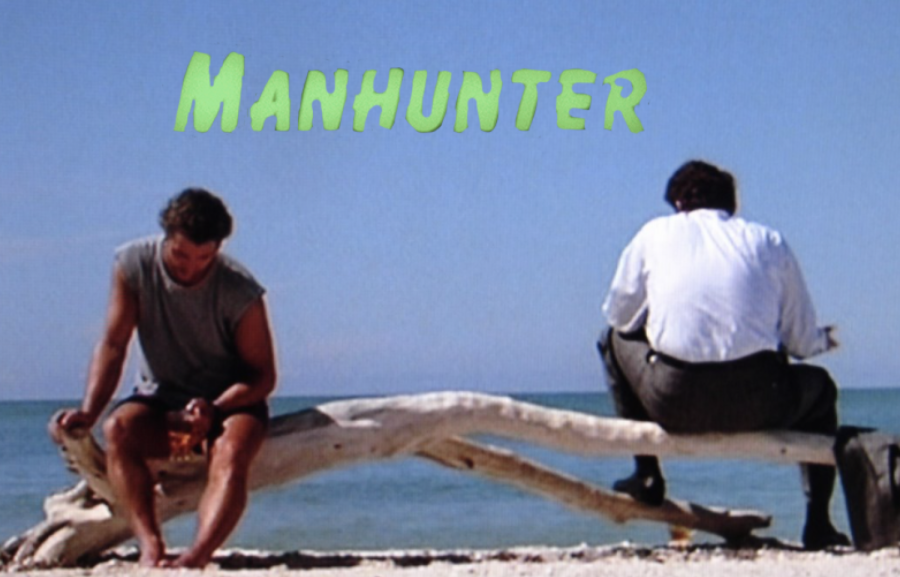 ‘Manhunter’ is the forgotten first installment in the ‘Silence of the Lambs’ universe. But with the power of a devoted cult fanbase, it has survived. Does it stand the test of time? Photo courtesy of Movie Mahal, Logo courtesy of Oscar Favorite

Silence of the Lambs swept the Oscars stage in 1991. Directed by Jonathan Demme and starring Anthony Hopkins as the iconic Hannibal Lector, it was a commercial hit, with the critics singing its praises too. But what a lot of people don’t know is that it’s a sequel.

Well, that isn’t entirely true. Technically it’s an adaptation of a book that was in a series wherein the first novel was already adapted. That first novel was Red Dragon, and its sequel was Silence of the Lambs. After Red Dragon’s release in 1981, producer Dino De Laurentiis decided to turn it into a film, although he changed the name to Manhunter when adapting it for the screen. He hired director Micheal Mann, who had directed two feature films prior to this project. Both were neon-drenched mood pieces with scores by Tangerine Dream. Neither were successes, and The Keep in particular soured his reputation due to its difficult conception. Before Mann became involved, the project was offered to David Lynch. Wouldn’t that have been interesting!

In terms of filmmaking, Silence of the Lambs and Manhunter could not be more different. Silence of the Lambs is very much a traditionally shot, edited, and scored film. It favors muted colors, almost gothic sets, and an orchestral score. Meanwhile, Manhunter features bright, unnatural colors, sparse and sometimes impossible set design, and a new age soundtrack.

That’s not to say I think Manhunter is a perfect film. In fact, it’s incredibly flawed. The plot concerns FBI agent Will Graham, who is trying to find a serial killer code-named the Tooth Fairy. He enlists the help of Hannibal Lecktor (notice the misspelling, an inexplicable change that was never repeated for the sequels) and this eventually leads him to Francis Dollarhyde, a video production worker who is obsessed with a blind coworker. I won’t spoil the ending, but hopefully you now have some idea of the film’s plot.

The main reason I enjoy Manhunter the way I do is because of its visuals and music. Every scene is bathed in an unreal and dreamy light, and scenes at Graham’s house are awash in a striking blue tone. Dollarhyde’s house is often covered in a sickly green light, and scenes at FBI offices are a stark and minimal white. These colors would never occur in real life, only in the movies, and the way Mann places his camera compounds this. Many shots feature characters who take up one third of the frame, with the rest being blank space or a blurry background. This is taken to an extreme in a scene taking place at a grocery store, where the items behind Graham in the shot change every time it cuts to him. This wasn’t intentional but Mann kept it in, probably because it only adds to the unreal atmosphere the movie cultivates. The architecture of the houses and prisons featured in the film are coldly modernist and white, and the skies are always either striking blue or burning orange from the sunset. And then there’s the music.

Mann’s music choice, no matter the film, is often seen as “dated”. In my eyes, everything ever made is “dated”. No matter how hard we try, any art made is tied to the decade in which it was created. It just so happens that Mann chose visuals and music that are quite possibly the most 1980s choices ever put on film. While some may see this as a bad thing, I see it as a positive. I find fashion, music, and art from the past to be fascinating, and watching something that encapsulates the decade in which it was made so perfectly can be rewarding. It’s almost like stepping back in time. I would argue that Manhunter’s ‘80s trappings make it more compelling. If Mann had done with a timeless aesthetic like Demme did for Lambs, I doubt his film would have much staying power. Instead, it’s a time capsule, a beautiful fever dream of a time that never existed, a product of MTV and commercials, all backed by a languorous new age soundtrack and covered in striking primary colors. Now, let’s talk about that soundtrack.

Mann opts for a patchwork score for his film, and for the most part, it works well. The original music was composed by The Reds and Micheal Rubini, who supply some solid ‘80s synth work. Elsewhere, Mann looked to post-punk trio Shriekback for three key tracks, pop artists Red 7 for the end credits, and new age musicians Kitaro and Klaus Schulze for some brief cues. But the highlight of the film’s music is by The Prime Movers, a group who would later go on to become a reggae Led Zeppelin cover band led by an Elvis impersonator. Their song Strong As I Am scores my favorite moment in the film. In the scene, we see Dollarhyde, who has cultivated a tender relationship with his blind coworker, waiting for her to return to her house. He sits in his van, and a car pulls up in front of her house. For a moment, we see him smile. This is something we have never seen this character do before. Dollarhyde notices his coworker going to the door with a male friend. He is instantly jealous. The man notices a piece of pollen on her lip and takes it off. But in Dollarhyde’s sick mind, he sees them kissing, spotlighted by a heavenly glow. It’s a moment that takes us into the mind of a killer, and the song fits the visuals perfectly.

Francis is easily the most compelling character in the film, as evidenced by the power present in that scene. His relationship with the blind woman, played by an excellent Joan Allen, is believable and chilling. Dollarhyde is a voyeuristic killer, obsessively watching videotapes of his victims, and this is smartly contrasted by Allen’s blindness. It is hinted that he is perhaps attracted to her lack of sight because to him, seeing is a curse. She cannot see his evil deeds or his odd physique. But this poses a problem because Dollarhyde isn’t our lead. He has a lot of screen time, sure, but nowhere near as much as William Petersen, who plays Will Graham. And while I like Petersen in this role, he just can’t compete with Noonan’s powerful performance as Dollarhyde. He’s a cold presence, and to many, he is off- putting. He has a strange way of delivering lines, and many times he can come off as over prepared. Much like the rest of the film, nothing he does is natural. But the actor who I really don’t care for in the film is Kim Greist. Greist plays Molly, Will’s wife, and she is a non-presence. Mann’s films have a consistent problem with uncompelling love stories, and shallow female characters. Compare this to Silence of the Lambs, which has one of the best female characters in movie history with Jodie Foster as Clarice Starling, and Manhunter just falls short.

Dennis Farina plays Jack Crawford, Graham’s boss, in a role that Scott Glenn would inherit for Silence of the Lambs, but the most iconic character that the two share is Hannibal Lector. Anthony Hopkins plays Lector in Silence of the Lambs with flamboyance and a very over the top brio, while Brian Cox is more subdued in Manhunter. Brian Cox’s Lecktor isn’t on screen very often, and when he is, he comes across as almost comical. He greets Graham with a pithy insult about his cologne and the two talk like old friends. When Red Dragon was re-adapted in 2002, Hopkins took the place of Cox, in accordance with his take on the character’s massive popularity. When Hopkins greets Graham in that film, he is undeniably evil. He relishes in his camp villainy, whereas Cox acts more like a droll neighbor. I prefer Hopkins in the role, but Cox is undoubtedly more realistic.

The films share much of the same structure too. An FBI investigator is trying to hunt a male killer, and they must use Lector to help them, with assistance from Jack Crawford. The Tooth Fairy’s closest analogue in Silence of the Lambs is Buffalo Bill, a “transvestite” killer who is far more violent and intense than Dollarhyde.  This aspect of the character has rubbed some people the wrong way. I must confess that the film’s use of the word made me squirm, although I still think the character is great. Ted Levine’s performance is instantly iconic, from his use of odd phrases like “great big fat person” to his chilling dance scene which was instantly iconic upon the film’s release. He’s an inhuman monster, with no good side that we can see. This is a major departure from Tom Noonan’s performance, which embeds Dollarhyde with humanity and likability. Noonan is a fantastic actor, one of the best ever in my opinion, and his greatest strength is the odd disconnect between his physicality and his personality. Noonan is tall and imposing, but he has an oddly likable face, and a soft-spoken, sweet voice. This contrast has suited him well for performances as charismatic serial killers, as he also played one in The X-Files.

Manhunter was not a success. It had a bad poster, a cast of character actors, and was based on a book that was only a modest hit. Even then, it didn’t use the book’s name, meaning most didn’t know that it was based on the novel. However, its cultural cachet has increased over time and it’s now become a cult hit, finding a new audience amongst those who see it as a unique, one of a kind gem. As a film, it was massively ahead of its time. Not only was it ahead of the curve when it came to Hannibal-mania, but it’s bombastic visuals and use of pop music as a soundtrack has inspired modern films like Drive, The Guest, and Baby Driver.

But is it better or worse than Silence of the Lambs? When people rank or discuss the Hannibal films, these two inevitably take the top two spots. Well, I think there’s room for both. Manhunter is a movie I respect more and am more fascinated by. I think about it a lot, mostly because of its incredible visuals and great music. However, it’s not particularly well structured, the storyline is all over the place, and it ends on an abrupt note. Silence of the Lambs, however, is written perfectly. It has set ups and great payoffs, has well-drawn characters that aren’t just the killer, and is actually suspenseful, a trait which Manhunter doesn’t quite pull off. Overall, I just find Manhunter to be so much more interesting, and well worth checking out. It’s currently available to rent on Amazon Prime and the beautiful Shout Factory Blu-Ray can be found there too, if you’re willing to pay a pretty penny.